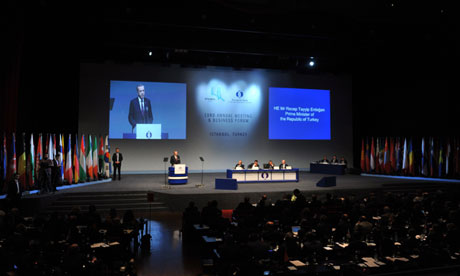 A group of Arab civil society organisations have voiced concern over plans by the European Bank for Reconstruction and Development (EBRD) for the Southern and Eastern Mediterranean (SEMED) region.

“We perceive that the kind of operations and interventions by the EBRD merely come to re-enforce and strengthen a certain model of economic and market liberalisation and privatisation operations that are not pro-development,” read a joint statement released by the organisations.

The group also said that projects administered by the EBRD needed to ensure higher levels of transparency and provide strong verification that the operations are being used for “environmentally sustainable projects” that would benefit local communities and the environment.

The statement also said the EBRD’s annual summit, being held this year in Turkey, would provide a chance for Arab civil society organisations to interact with EBRD staff to communicate points of concern on the bank’s interaction in their respective countries. Prime Minister Hesham Qandil travelled to Turkey with a delegation on Friday to attend the summit.

The EBRD generally guides countries to have more “open” economies, a trend the civil society groups claimed have already proved to have “undesirable impacts on development in the Arab region”.

“We ask the bank to show more commitment in allowing civil society and local community participation in policy-making processes, especially when it comes to financing projects that directly impact their livelihoods,” said the organisations.

The statement stressed the importance of the EBRD’s coordination with local communities, civil society in Arab countries, and environmental impacts of planned projects.

The civil society groups also stressed that projects would need to foster employment generation and poverty alleviation, which “do not seem to be among the Bank’s priorities.”