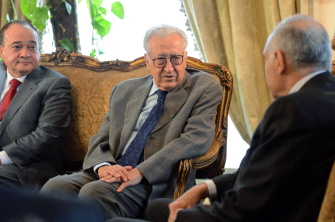 A statement published by the Ministry of Foreign Affairs on Saturday said the pair discussed the latest developments in the Syrian conflict and the preparations for the upcoming international conference to be held at the end of May. The conference is a joint effort by the United States and Russia, announced by US Secretary of State John Kerry and Russian Foreign Minister Sergey Lavrov last Tuesday.

On Thursday Amr welcomed the decision to hold the conference, saying the initiative is “in line with the Egyptian initiative”.

The preparations for the conference come at a time when Egypt is looking to reignite the Quartet Initiative proposed by President Mohamed Morsi last August. At the end of April Morsi sent representatives to Iran to “discuss ways of activating the quartet initiative”. A few days later Morsi’s Assistant on Foreign Relations and International Cooperation Essam El-Haddad, who had travelled to Iran said that a ministerial meeting to reignite the initiative would be held “soon”.

Turkey and Saudi Arabia complete the quartet, which has met three times since Morsi proposed the initiative. However, Saudi Arabia sent a representative to only the first meeting.