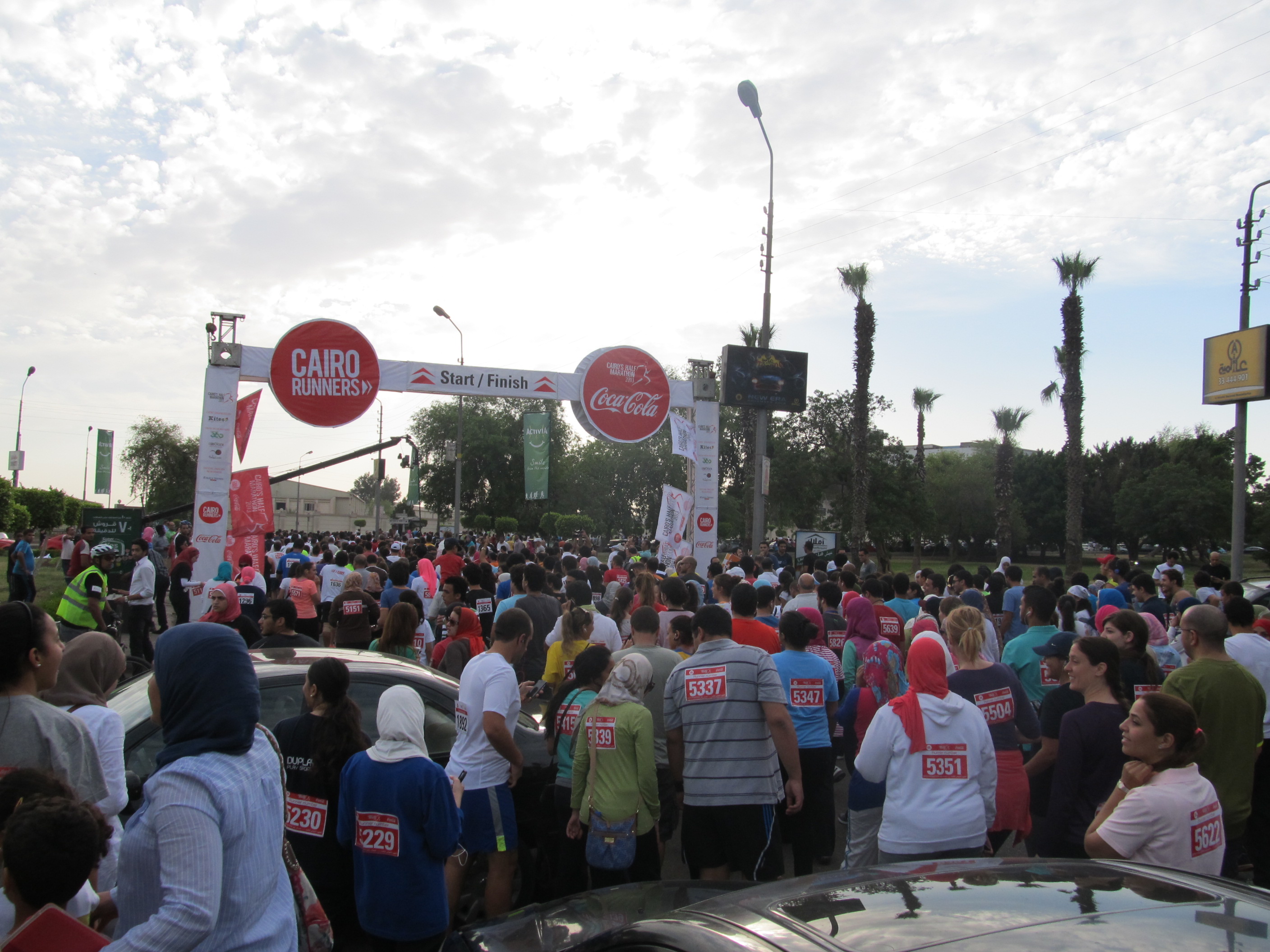 Men and women of all ages donned their jogging shorts and running shoes, carrying bottles of water as some of them stretched and warmed up on Friday morning; these runners and sports enthusiasts were on their way to participate in Cairo’s first-ever half marathon.

The half marathon was the idea of the group Cairo Runners, a group that organised runs and jogs in different areas in Cairo. The sports club had been helping participants prepare for the half marathon since late last year.

“The founder, Ibrahim Safwat, was inspired by the French who frequently ran in the streets and decided to implement the idea in Egypt,” said Mohamed Seif, Cairo Runners’ media manager.

He added that during 14 runs all around Cairo no major harassment incidents occurred. “Whenever anything happened we were on the spot; people on the streets either encouraged us or made fun of us until we explained the idea, then they were supportive,” Seif said.

More than 2,000 participants gathered in Almaza, Heliopolis at 6am on Friday, to run one of two routes for the runners: a short 7km route, or the half marathon route which was 21.7km long.

At 6.30am runners embarked on routes that took them through different areas in Heliopolis like Orouba, Thawra and Nozha, and then returning back to the start/finish line at Almaza.

Runners raced through the streets led by cyclers. “We are from a group called ‘Wheelers’ and we’re here to support the runners,” said Ahmed Hamdy, who cycled next to the runners taking photos of them.

He added that a group of them cycled ahead of the runners to show them the route, stopping cars at intersections and distributed water and energy bars to participants.

“We also help in case someone is injured or tired or anything goes wrong,” Hamdy said.

There were multiple water stations along the route where members of Cairo Runners distributed cups of water and cheered the runners on to help them keep going.

The short-route runners arrived at the finish point around 7.30am, where they were met by more cups of water, juice and yoghurt.

“It was a thrilling experience, I had fun, exercised and met many people I know,” said Waleed Sherif, one of the participants in the short run.

“I look for interesting things to do in Cairo and when I heard the money would go to charity I wanted to take part… It was a very nice experience,” said Claudia from Italy.

Shortly after 7.30am people gathered around the finish line to wait for the half marathon racers. The first three men and women to arrive at the finish would receive vouchers from an online shopping website worth up to EGP 1,500 and running shoes or vouchers from Nike.

The first to arrive was Hassan Marzouk, finishing the 21.7km in one hour and 12 minutes.

“I came here to help encourage tourism,” Marzouk said. “I’m a professional runner since 1995 and I was just in a marathon in North Korea in mid-April.”

The second and third to arrive, Sayed and Yehia, were both also professionals.

At about 8am Hadeel Magdy arrived at the finish line; she’s a half marathon Egyptian champion who has been running for four years.

“I enjoyed this run, it was very exhausting but very nice and it feels great to be the winner of Cairo Runners,” Magdy said.

In second place came Madhu Jena from India. “It was amazing, I used to run in Maadi but this had much more space and it was very well organised,” she said.

She added that she participated in a 100km run as well as a full marathon in Salzburg five days ago; she also took part in marathons in Luxor and Dubai.

“The weather was too hot, but there were a lot of people cheering us and giving us water along the way,” said Sofie from Denmark who came in at third place.

Runners continued to pour into the finish. “I’m 58 years old and I started running five years ago; I salute them for the perfect organisation,” said Al-Mahdy Ahmed, one of the runners.

Following the run, participants made their way to the garden where a number of booths were set up, as organisers prepared to announce the winners; most booths were for charity organisations.

One booth for “Wataneya” attracted particular attention. “It’s an organisation for developing orphanages and teaching people how to act and what to do when visiting orphans,” said Yasmine Al-Hagary, a member of Wataneya.

She added that they joined Cairo Runners because they defied the norms of the society that does not encourage running on the streets, comparing this to how Wataneya also challenges norms of mistreating orphans.

The celebration began at about 10am and was hosted by Nile FM radio presenter Mohamed Safi. Former member of parliament and owner of Al-Sawy Cultural Wheel Mohamed Al-Sawy delivered the cup to the winner.

Cairokee took the stage at 10:30 and they were received very warmly by the runners who enjoyed their performance and danced to their songs.

“Sports in Egypt started today, this is what sports should be like, beautiful morale and public participation,” Al-Sawy said.