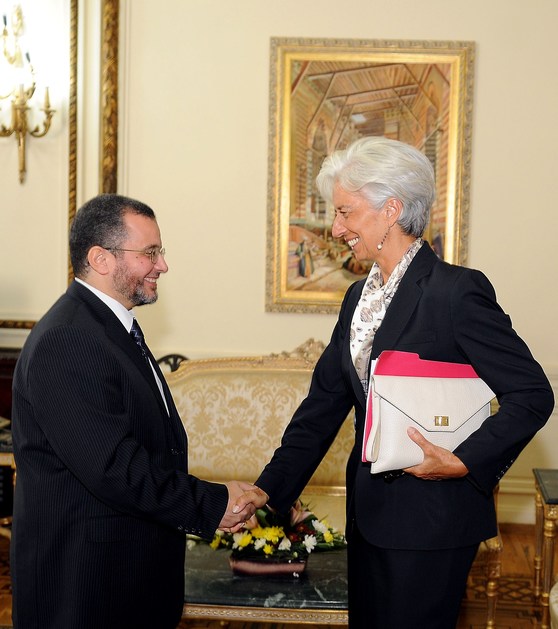 Prime Minister Hesham Qandil stated that negotiations currently being held with the IMF to secure the country’s pending $4.8bn loan were ongoing, and said that Egypt’s government sought to conclude a deal as fast as possible.

IMF officials stated that the largest obstacle to achieving progress during the negotiation process had to do with Egypt’s budget. Managing Director for the IMF Christine Lagarde reiterated during a recent press conference that her organisation sought to help the Egyptian people and was not yet prepared to leave the negotiating table.

During a recent trip to Turkey, Qandil stated that the Egyptian government had not requested an increase in the size of the loan, refusing to answer questions as to whether or not Egypt’s government wanted to secure more funds.

An agreement between the two parties was nearly reached in December 2012, only to be thwarted after President Mohamed Morsi imposed but subsequently froze a new set of taxes on a number of goods entering the country.

Qandil stated during a recent press conference that “the IMF has reviewed the economic and social reform package put forth by Egypt’s government, and we have presented the IMF with the necessary information and data requested. There is no need for IMF delegations to conduct any further trips to Egypt”.

A source within Egypt’s Finance Ministry stated that Fayyad Abdel Moneim, the country’s new Finance Minister, recently reviewed the content of negotiations between the IMF and the Egyptian government. The source stated that it was likely that a number of amendments would soon be made to Egypt’s economic reform program, including restructuring Egypt’s subsidies, tightening the government’s private spending gaps, addressing the budget deficit, and increasing the Treasury’s foreign currency reserves. Such reforms should allow for Egypt to fund its imports for the next 3 months, and ensure that the government operates with transparency in all of its transactions.

Egypt’s Central Bank announced last Wednesday that the country’s foreign currency reserves had risen to $14.4bn, with $1bn recently acquired through a loan received from Libya.

Qandil denied that the country’s recent credit downgrade would have a negative effect on the government’s negotiations with the IMF.

He said: “We have nothing to hide with regards to our economic reform program, and seek to scale back the size of our budget deficit which is expected to reach EGP 200bn by the end of this current fiscal year. This deficit has been described as large and getting worse, with some claiming that simply scaling it back will not help to achieve growth. However it should be noted that what we need now is to take steps to encourage increased investment in the country, and reach a state of reconciliation with the international business community.”

He reinforced that the country’s economic reform program bore costs that “we all must carry together”.

A source within Egypt’s Finance Ministry stated that securing the loan would most likely be postponed until next July due to decreases in a number of the country’s economic indicators, in addition to Egypt’s recent credit downgrade. This postponement, he said, would provide the government with ample opportunity to end negotiations regarding the country’s budget, implement new tax and subsidy reforms, present a new sales tax law to Egypt’s Shura Council, and conclude negotiations regarding the country’s new sales tax law. Both new tax laws, he said, could then be released together.

Qandil further stated that there was nothing to fear regarding the government’s program to release additional treasury bonds as a means of closing Egypt’s budget deficit, saying such a program was merely a temporarily solution until the government collected more tax revenues.

Amr Darrag, Egypt’s new minister of planning and international cooperation, stated that he would not comment on recent negotiations between Egypt’s government and the IMF. “I have not reviewed the contents or minutes of the negotiations and I cannot at the moment identify or determine when an agreement will be signed,” he said.