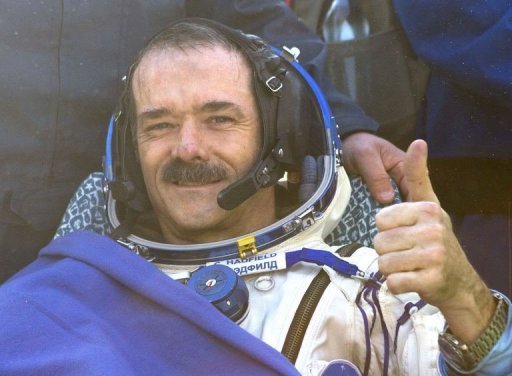 AFP – Canadian spaceman Chris Hadfield on Tuesday returned to Earth along with two other astronauts after a half-year mission to the International Space Station that saw him shoot to global stardom through his Twitter microblog.

Russian state television pictures showed the giant white parachute of the Soyuz capsule unfurling successfully after re-entry and the capsule then touching down in the Kazakh steppe, sending a plume of dust upwards into the sky.

The Soyuz touched down at 0231 GMT in the steppe south of the central Kazakh city of Karaganda. The Soyuz landed on its side rather than vertically, but this is a relatively common occurrence.

On a sunny spring morning, all three astronauts were then successfully extracted from the capsule by recovery teams who rushed to the scene in helicopters.

They were then placed in special chairs amid the long steppe grasses, covered in special thermal blankets and offered tea by the ground crews. All three appeared in good health.

The trio were then whisked away to a medical tent for checks and would later be taken by helicopter to Karaganda. Romanenko will then fly on to Moscow while Hadfield and Marshburn will be taken by NASA to Houston.

Hadfield captured the public imagination with regular updates on Twitter that gave an unprecedented insight into daily life in space and access to spectacular images taken from the ISS.

In a fitting climax to his mission, Hadfield posted a cover version of the David Bowie classic “Space Oddity” that showed him singing and even playing the guitar aboard the station.

The impressively-performed video became an immediate hit on and on Tuesday morning barely two days after it was first posted had garnered almost five million views.

Using the power of social networks more effectively than anyone in the history of manned space flight, Hadfield has now arguably become the world’s most prominent astronaut since the days of Neil Armstrong and Buzz Aldrin.

He has also blazed a new trail for how astronauts can inspire the public at a time when some scientists question the need for manned space flight to the ISS amid constant budget pressures.

Tweeting under the Star Trek-like name Cmdr_Hadfield, the astronaut posted spectacular pictures of the Earth seen from the sky and also insights on the mundane aspects of eating and washing in space.

“Hadfield captured the world’s attention,” the Canadian space agency said in a statement after the landing.

It said his outreach work has “reminded the world that space exploration is not only about looking beyond but also about learning about Earth.”

Hadfield was naturally unable to tweet or access the Internet during the descent back to earth in the cramped Soyuz capsule although his son Evan maintained a running Twitter commentary on the descent.

His final tweet from space was a spectacular image of the sun glinting over the Earth as it rose. “Spaceflight finale: To some this may look like a sunset. But it’s a new dawn,” Hadfield wrote.

Raised on a corn farm in southern Ontario, Hadfield become a top fighter pilot for the Canadian air force before being selected from over 5,000 people in 1992 to be one of four new Canadian astronauts.

This was his third space mission, after flying with the US shuttle to the now defunct Russian Mir station in 1995 and to the ISS in April 2001.

Hadfield, who was commander of the station, also oversaw a dramatic spacewalk at the weekend performed by Americans Marshburn and Chris Cassidy to halt an ammonia leak.