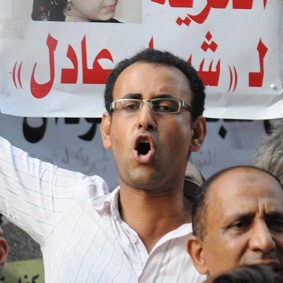 At the conference, held by the United Group human rights organisation, Saleh said Abu Deif was either shot by “expanding (dumdum) bullets or by lead bullets”. Expanding bullets are internationally-prohibited bullets which expand once fired to produce a larger wound.

Abu Deif was shot while covering the Presidential Palace clashes last December. He fell into a coma and died a week later.

“The choice of aiming at the head is also significant,” Saleh said. “The highest chance of causing death is when firing at a person’s head; there’s a 90 to 95 percent chance the victim will die once the bullet penetrates the skull.”

Saleh was delegated by United Group, the organisation handling Abu Deif’s case, to produce an autopsy report on the journalist’s death because the group was disappointed with the official medical report. The official report failed to mention the type of the weapon and bullet used. He stated that both types of bullets are mainly used by professional shooters.

“The bullets were deformed by the firing process,” Saleh said. “It’s not possible to discover their caliber afterwards.”

Saleh’s report suggests that Abu Deif was assassinated and not randomly shot, said Abdel Hameed Salem, head of United Group’s legal committee. “He was specifically targeted while standing among a group of protesters,” Salem said.

Artist Mahmoud Abdel Qader, a close friend of Abu Deif, was with him when he was shot and testified for the prosecution. Abu Deif allegedly took photos of Muslim Brotherhood supporters holding firearms before being shot. Abdel Qader said that the bullet was fired from the direction of a group of President Mohamed Morsi’s supporters.

United Group submitted the advisory report to the prosecution on Monday, said Salem. They also submitted a memorandum with a set of demands including a serious investigation into the incident by the security forces, examining the surveillance tapes from the presidential palace for that day, and comparing the bullet fragments recovered from Abu Deif’s body with those from other shooting victims.

“If the prosecution doesn’t respond to our demands, we will demand the delegation of a judge to investigate the case,” Salem said. “We did not request forming a tripartite committee to produce a separate medical report because we trust the accuracy of the advisory report we presented.”

Abu Deif was a reporter for Al-Fajr newspaper and a freelance video journalist.