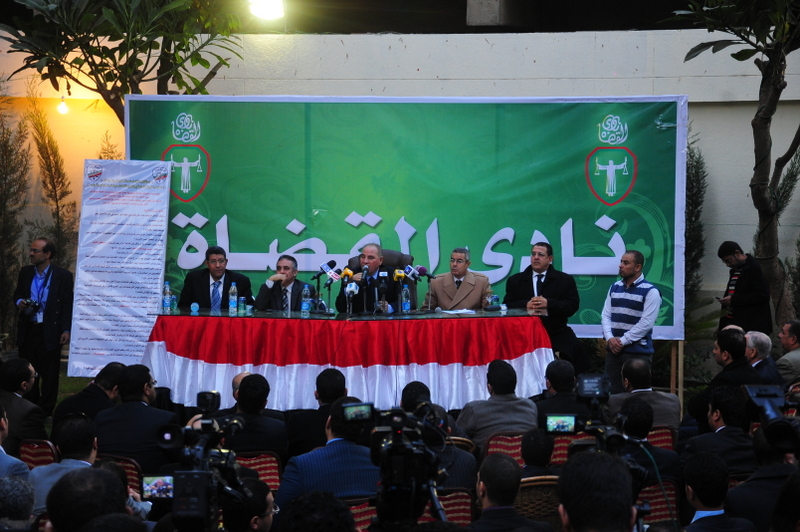 The Judges’ Club released a statement on Wednesday announcing that it will boycott the Justice Conference called for by President Mohamed Morsi in April.

“We had specific conditions to participate in the conference,” said First Deputy of the Judges’ Club Abdallah Fathi.

The Club demanded the law they would draft after the conference be presented to an elected parliament and not the Shura Council. They also rejected Prosecutor General Tala’at Abdallah’s participation.

The Club stated that the boycott was prompted by the Shura Council’s decision to present to its members the amendments to the judiciary law proposed by some parties. The Shura Council designated the 25 May session for discussion of these amendments.

“The call for the conference by the presidency was accompanied by statements that indicated the proposed amendments were disregarded and will not be discussed again. This was welcomed by the judges and encouraged them to consider participating in the conference,” the Judges’ Club statement read.

The Judges’ Club called on the Supreme Judiciary Council (SJC) and the Ministry of Justice to boycott the conference and said any judge who participates would do so in an individual capacity.

The SJC held an urgent meeting on Wednesday and announced that due to the Shura Council’s decision, they would stop preparations for the conference.

The SJC said its decision was made after consulting the heads of the Supreme Constitutional Court, the State Council, State Litigation Authority, and the Administrative Prosecution Authority.

“After the Shura Council’s announcement we realised the reason behind the conference was passing the controversial amendments,” Fathi added.

The Justice Conference was called for by Morsi after proposed amendments to the Judiciary Law caused a rift between the judiciary and the regime.

The conference includes judges, members of judicial authorities and clubs as well as legal experts, professors and lawyers. The participants are tasked with drafting their own judiciary bill which the president promised to endorse when presented to the Shura Council.