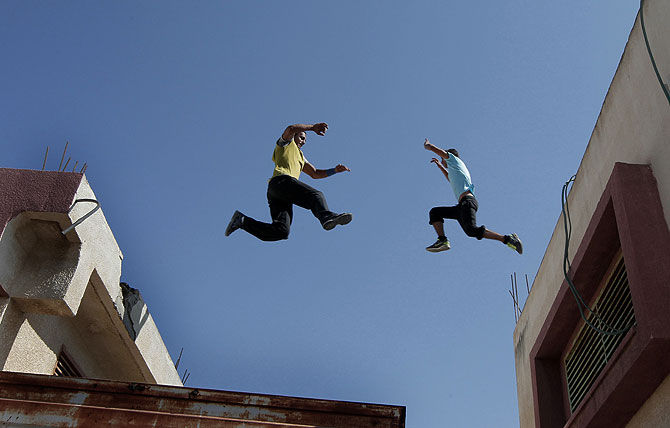 Parkour and free running may not be the first sports to enter one’s mind when thinking of Egypt; a group of young people scaling buildings and performing acrobatic stunts in the bustling cities of Alexandria and Cairo would raise some eyebrows, to be sure. Parkour, however, is a popular if unorthodox sport that has taken a firm hold in the Land of the Pharaohs.

Established in 2008, Parkour Egypt styles itself as the first parkour club in the country, running training seminars from Alexandria to Cairo and as far as Hurghada. This young group of talented men and women has practiced their art for years, braving international events and performing on the busy streets of Egypt as spectators watch, bemused.

The group says it is dedicated to teaching people what parkour really is while promoting proper techniques in order to minimise injuries during training. The group hosts open sessions where people may come to participate or observe.

Nasser Mahmoud began working with parkour in 2005. Alongside a handful of friends he made several video clips and uploaded them to the internet. A physical education graduate and gym teacher, Mahmoud said he wanted to change the way schools approached sports.

“In 2006 the school I was teaching in gave me the chance to test parkour as a sport in class and so we did,” Mahmoud said. The experiment garnered the attention of several people and by 2008 he was teaching parkour to roughly 200 people, giving rise to Parkour Egypt.

Since then Parkour Egypt has sent a team to participate in Arabs Got Talent, and Mahmoud says he has been contacted several times to do stunts for movies. The group practices in deserted locations and gymnastics halls.

Mahmoud says the group chooses such locations because their actions attract scrutiny from the general public, who are unaware of the group’s activities. “In the beginning it was a problem,” he said. “People often asked us what we were doing quite sceptically and that is why we choose empty buildings and abandoned areas.”

Mahmoud said there is an important distinction to be made between free running and parkour. “Parkour is about navigating obstacles fast and efficiently,” he said, adding that a fireman would not perform acrobatic stunts when doing his job. “Free running is all about the show, doing flips and adding flare to the performance.”

Parkour originated from the concept of military obstacle training exercises. As it evolved parkour became an art form which forces its practitioners to look at new ways of interacting with their environment.

Practitioners of parkour state it is more than just a sport; it is a philosophy on life that teaches its practitioners to hone their minds and bodies. In a television documentary one of its core founding members Châu Belle called it a form of expression and a state of mind aimed at overcoming and adapting to mental and emotional obstacles as well as physical barriers.

Parkour Egypt calls parkour a new way of relating to the environment which surrounds us. “Parkour helps us to be able to face all of the obstacles which are presented to us, whether they are in a natural environment or urban structures,” the group explains on their official page. “The art demands speed, strength, balance, focus and above all, fluid movement. It is a battle against your innermost fears. Parkour helps to enlighten the soul and build self-belief.”