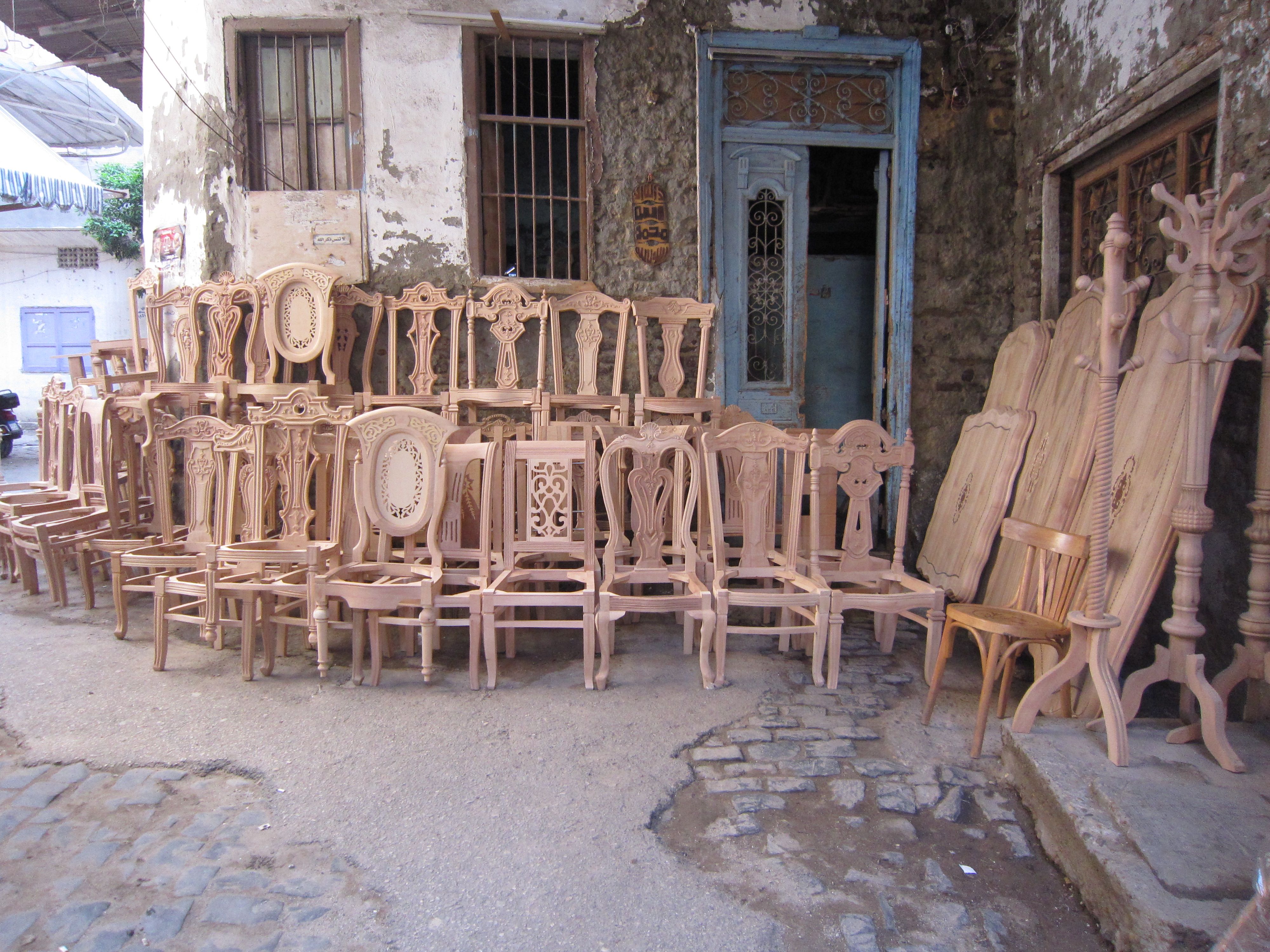 The trip from downtown Cairo to the city of Damietta is about four hours and half by bus. The trip is not short and could be hectic. For someone who wants to save up thousands of Egyptian pounds on buying furniture, however, the long trip and the fatigue are worth it.

Like thousands of Egyptian middle-class families who travel from all governorates to Damietta, Eman is travelling to help her son buy furniture for the apartment he will move into after his wedding.

“We’re travelling to check prices and buy ready-made furniture from exhibitions there because my son is on vacation from his work in Saudi Arabia,” she says excitedly.

The bus is packed with families and couples who came for the same purpose. Everyone is conversing about the most reputable exhibitions in Damietta.

Other passengers on the bus are obviously businessmen, furniture factory and exhibition owners working in the furniture business between Cairo and Damietta. Some spend their time marketing their exhibitions, or recommending other vendors.

Wood warehouses mark the entry to the city on both sides of the road. Upon arriving in Damietta, its two biggest features are dairy and oriental desserts’ stores, and furniture exhibitions and workshops.

Overall, the abundant furniture and dairy stores, coupled with the hundreds of vans, trucks and lorries parked everywhere give an atmosphere of creativity and productivity.

A closer look at this productive city, and one of its most famous streets, Abdel Rahman, however, reveals a different picture. At this time of the year, the street is supposed to be vibrant with families and couples who are seeking to furnish their new apartments. For a street that has an estimated 600 micro, small and medium-sized workshops, exhibitions and shops, it seemed quiet dull and almost lifeless in the late afternoon.

“It’s the impact of the recession that hit Egypt. It is affecting the furniture business big time. At this time of the year, this street used to be so crowded that no one can pass. No taxis agreed to enter it. Now look at it,” says Ahmed, the owner of a workshop that manufactures salons.

Walking on Abdel Rahman Street is like walking in wood city. Chairs, tables, sofas, salons, dining rooms, cupboards, and cabinets are displayed everywhere in the alleyways of the street. Recently and for the past few months, the workshops producing these structures have been facing a huge financial crisis.

“All our raw materials are imported and thus they are affected by the depreciation of the Egyptian pound. The cost of raw materials for workshops, carpenters and exhibitions has doubled,” says Ahmed.

The economy of Damietta is strictly bound by the fluctuation of the US dollar and that is why the furniture business is suffering.

An example that many workshop owners mentioned was the price of beech wood (a type of woods that is heavy and strong and used mostly for manufacturing bedrooms). “The price per meter has increased from about EGP 1600 to EGP 2220 and some other types have exceeded EGP 3000,” Ahmed explains.

According to Ahmed, the situation started to decline gradually after the 25 January Revolution, but it was bearable right after the revolution. Starting in 2012 the workshops have suffered losses.

“Our business is not just dependent on manufacturing, but a huge part of it is about marketing your product. If your workshop is in a small unknown alleyway in Damietta, it is not the same as being in a famous street like Abdel Rahman. Here the customer passes by and sees our woodwork in the making,” says Ahmed.

Since the recession is affecting the whole country, people seeking to buy furniture have stopped coming to Damietta. Mohamed Al-Zainy, the head of the Chamber of Commerce in Damietta said in a statement to the state-owned Al-Ahram that the number of customers in Damietta has decreased to only 50% of the average number that used to visit the city.

Some micro enterprises with small capital have closed down because they could not withstand the crisis. Others continue to suffer with their financial commitments.

“We are committed to pay our bills, taxes, insurance, monthly instalments for the workshops and cleaning fees,” Ahmed explains, adding, “Every single store in Damietta pays about EGP 30 or EGP 15 as a monthly cleaning fee depending on your activity in the enterprise. It is true that this might be nothing, but we do not get such service and we end up cleaning ourselves.”

“I end up with barely a profit margin that covers the expenses and wages of the artisans at the workshop,” he adds.

“Even though workshops and artisans may produce less furniture, but they have to work anyway. Exhibitions buy their woodwork, but due to the recession there is no guarantee that these exhibitions would be able to sell the furniture to the end user. Some pieces of furniture could stay unsold for one year others could be sold right away,” he says.

Rizk explains that since prices are rising, every time customers negotiate prices, exhibition sellers have to justify the rising prices to them. Some of them buy, while others do not accept to be charged higher.

“Customers now prefer not to come to Damietta, but buy directly from exhibitions in their governorates. This leads our goods to remain unsold for a long time,” he adds.

Artisans and workers suffer the most

Adel is an artisan at another salons’ workshop. He complains of the increasing prices that have affected the business and his wage greatly. The average weekly wage of an artisan is EGP 300-500, depending on the kind of work, and his experience. Adel gets EGP 50 per day.

“The crisis has decreased the workshops’ profits and we [the workers and artisans] are the most affected by this. We have children and households to take care of. The daily wage we receive accounts for nothing. It barely covers the cost of the private lessons I give to my children,” he says.

Adel adds other reasons to why the crisis in Damietta is happening.

“Energy is another problem. The electricity cuts make our job harder and slow our productivity. Also, the way wood importers control the prices of wood which exacerbates the situation,” Adel explains.

At Adel’s workshop, the owner had to dismiss a number of artisans and workers to be able to cover his expenses, reducing the number of workers from five to two.

“Our business is at a standstill. The customers who used to come from all governorates do not have enough money to buy our now highly-priced furniture. Except a few who have a limited budget,” says Adel.

The dismissal of workers and the shutting down of some enterprises incited artisans, workers and workshop owners to hold a demonstration at the governorate building of Damietta on 8 April. They protested against the rising prices and the economic policies of the government.

Adel believes the demonstration was unsuccessful and that the Chamber of Commerce in Damietta is unable to solve the problems the furniture sector is facing.

On the other hand, at the end of April Al-Zainy announced the formation of an organisation that will aid micro and small enterprises to overcome their financial problems.

Competition from China and Turkey?

In addition to the plethora of hardships that the furniture business is facing, it also must confront the problem of Chinese goods invading the market. A Chinese TV cabinet can be bought for EGP 300, while one that is made in Damietta could reach up to EGP 1000.

Workshops owners insist that there is no true competition between Chinese and Damietta’s furniture.

Adel says, “Chinese furniture has a good appearance and it’s cheap, but quality wise everyone knows that Damietta’s furniture is like no other.”

The drawbacks of buying Chinese are mainly quality related. Unlike the natural wood used in manufacturing furniture in Damietta, most of the Chinese furniture exported to Egypt is made of manufactured wood; such as plywood and medium-density fibreboard (MDF). These types are not durable and could be easily broken.

“Turkish furniture is competing with our local furniture industry and the current government is allowing such entry with no protection to the local market because they have business ties with Turkish companies,” he notes.

Wahid is referring to Hassan Malek, a Muslim Brotherhood affiliated businessman who runs the Egyptian branches of Istikbal, a Turkish furniture company.

At one of the biggest Turkish furniture exhibitions in Cairo Dogtas a modern living room could cost up to EGP 25,000 which is equivalent to what a high standard classic salon from Damietta may cost.

In March chairman of the Export Council of Furniture, Ihab Idris, has petitioned the Ministry of Industry and Foreign Trade and the Ministry of Finance to revisit the clauses of the Qualifying Industrial Zone Agreement (QIZ) between Egypt and Turkey. The year 2012 witnessed an increase in Turkish furniture exports to Egypt that reached  $157m.  According to the QIZ, Turkish exports get exempted from customs. This may jeopardise the local furniture industry according to Idris.

“I wish the government was more cooperative, specially that here in Damietta we’re all working and being productive. It can help us by removing hardships such as the electricity issue,” says Ahmed.

Adel demands that the government intervenes to regulate the work of wood importers. He says, “wood importers who have bought wood at a low price, stored it and now selling it to workshops for a new extremely high prices are the ones impacting our work the most. The government should intervene to solve this problem.”

The Shura Council (Egypt’s Upper House of Parliament) has dedicated a session to discuss the crisis of Damietta, but it is not clear yet what steps the government is taking to save the furniture business.