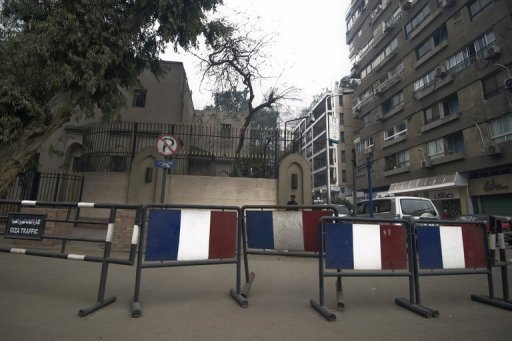 AFP –  An Al-Qaeda-linked cell broken up in Egypt at the weekend planned to bomb the US and French embassies in Cairo, state news agency MENA quoted investigators as saying on Wednesday.

“The accused planned suicide car bombings outside the embassies of France and the United States in Egypt,” MENA said

In the case of the French mission, the motive was to register a protest “against French military intervention in Mali,” investigators were quoted as saying.

The news agency did not say why the American embassy was to be targeted.

On Saturday, Egyptian Interior Minister Mohamed Ibrahim said police had arrested three members of a “terror cell” involved in a transnational plot to bomb a Western embassy and other targets.

Ibrahim said they were captured with 10 kilograms (22 pounds) of fertiliser, and a computer containing instructions on bomb-making.

MENA said the three were Egyptian and quoted security sources as saying they had been among prisoners who managed to escape from prison during the 2011 uprising against former president Hosni Mubarak.

Two of the suspects had been extradited in 2009, one from Algeria and the other from Iran, the agency said.

The three admitted having been in contact with Al-Qaeda but denied plotting any attacks, the agency added.

On Saturday, Ibrahim said they had been in touch with Kurdi Dawud al-Assadi who is “the head of Al-Qaeda in some west Asian countries.”

One of them associated with Al-Qaeda members in Algeria and received training from the loose-knit militant organisation in Pakistan and Iran, Ibrahim said.

The suspects’ lawyer said he attended their questioning on Saturday and claimed the prosecution had no evidence, including disputing that they were caught with explosives.

“This is just a case of the security apparatus trying to assert its worth,” Mamduh Ismail told AFP.

MENA said on Saturday prosecutors had ordered two of the suspects, from the Mediterranean city of Alexandria, detained for questioning for a renewable 15-day period, and that the third was under house arrest.

According to Ibrahim, Assadi had instructed the suspects to coordinate with two other alleged militants before their capture last October after a firefight that killed a gunman in a Cairo apartment.

Those two, also alleged to have Al-Qaeda links, are now on trial.

Fuad Allam, a retired interior ministry general who helped crack down on Islamist militants in the 1980s, said he believed militants identifying with Al-Qaeda have begun to coalesce after the Arab Spring uprisings.

“The terror cells (in the region) are beginning to gather, they seem to have an organisation.”

One of the suspects arrested in October allegedly had links to an attack last September 11 on the US consulate in the Libyan city of Benghazi that killed ambassador Chris Stevens.

Egypt has previously announced arresting Al-Qaeda-linked militants in the country, which has seen a low-level Islamist insurgency and militant attacks on tourist sites over the past three decades.

Some veteran Egyptian Islamist militants are now in Al-Qaeda’s leadership. Most prominent is Ayman al-Zawahiri, who heads the extremist organisation founded by Osama bin Laden.

Others had been jailed and recanted violence before their release following the 2011 uprising.

There has been a resurgence in militant attacks since the uprising, confined to the sparsely populated Sinai peninsula, in which both Egyptian troops and neighbouring Israel have been targeted.