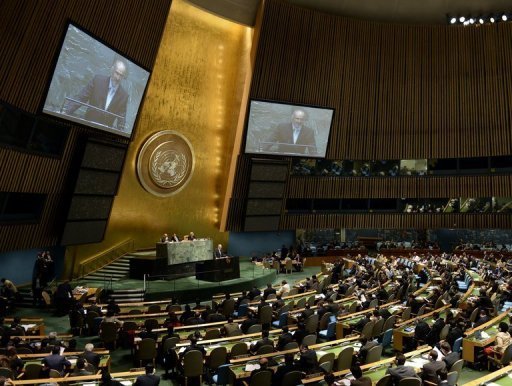 By Tim Witcher (AFP) –  The UN General Assembly condemned President Bashar al-Assad’s “escalation” of the Syrian war as rebels battled to free inmates from a prison in the key city of Aleppo.

The vote came on the eve of talks between US President Barack Obama and Turkey’s Prime Minister Recep Tayyip Erdogan, a key player in the drama as leader of a former Syrian ally that now backs the revolt against Assad.

After three years of civil war — and with the death toll topping 90,000 — leaders and envoys from world and regional powers are shuttling between capitals trying to drum up support for a negotiated end to the bloodshed.

But the way forward is difficult, as shown by the vote of Syria’s key ally Russia, a permanent Security Council member that fiercely opposed the UN resolution passed by 107 votes to 12 at the 193-member assembly.

The resolution, drawn up by Qatar and other Arab states with Western backing, expressed “outrage at the rapidly increasing death toll” in Syria.

It also condemned “the continued escalation in the use by the Syrian authorities of heavy weapons” and of ballistic missiles against civilians.

But the text was more controversial, and drew the ire of both Russia and Assad’s UN envoy, where it endorsed the opposition Syrian National Coalition as a player in future talks on a transition of power in Damascus.

The resolution welcomed the Coalition “as effective representative interlocutors needed for a transition.” An angry Russia said this would encourage opposition “armed actions” against the Assad government.

Russia and the United States have agreed to press for a new international conference on Syria expected to begin in Geneva next month.

But Russia’s UN Ambassador Vitaly Churkin wrote to all 193 UN members ahead of the vote saying that supporting the resolution would “be a serious blow to all attempts to bring the Syrian sides to the negotiating table.”

The number of countries that backed the resolution was down from 133 when the last vote on Syria was held in August.

China, Iran, North Korea, Russia and Syria were among 12 countries to oppose the resolution. Fifty-nine, including Brazil, South Africa and India, abstained.

Obama was expected to address the crisis on Thursday in Washington, in talks with Erdogan. Turkey has provided a rear base for some of the rebels fighting Assad, but faces a refugee crisis and bomb attacks on its own territory.

The United States has so far ruled out arming the rebels directly itself, but Obama has said that any use of chemical weapons by Assad’s regime would cross a “red line” after which new options would be considered.

A senior US official meanwhile said that small amounts of chemical weapons have indeed been used, but that it was too soon to declare that the regime had exceeded Washington’s willingness to tolerate its actions.

“The intelligence community has agreed with varying levels of confidence that chemical weapons were used in small amounts in at least two instances in Syria,” Under Secretary of State Wendy Sherman told US lawmakers.

“But having high confidence up in the intelligence community, for which I have great admiration, is not in fact all that one needs to take some of the actions that many people have contemplated.”

Syrian troops desperately held off a rebel offensive on Aleppo’s central prison after its wall was blown up by suicide car bombers, according to the Syrian Observatory for Human Rights.

About 4,000 prisoners, including Islamists and common law criminals, are held on the outskirts of the city, the observatory’s head Rami Abdel Rahman said.

The rebel Free Syrian Army pledged to punish atrocities carried out by its own side, amid outrage over a video showing an alleged insurgent apparently cutting out the heart and liver of a corpse and biting them.

The gruesome footage has raised new fears about the potential for grisly sectarian violence in Syria as the country falls apart.

Field commanders had been instructed “to begin a prompt investigation into the matter in which the perpetrator will be brought to justice.”

Syria’s Internet service was cut for the second time in a week. The SANA state news agency said the blackout was caused by a fiber-optic fault, but some suspect that outages are timed to coincide with government offensives.