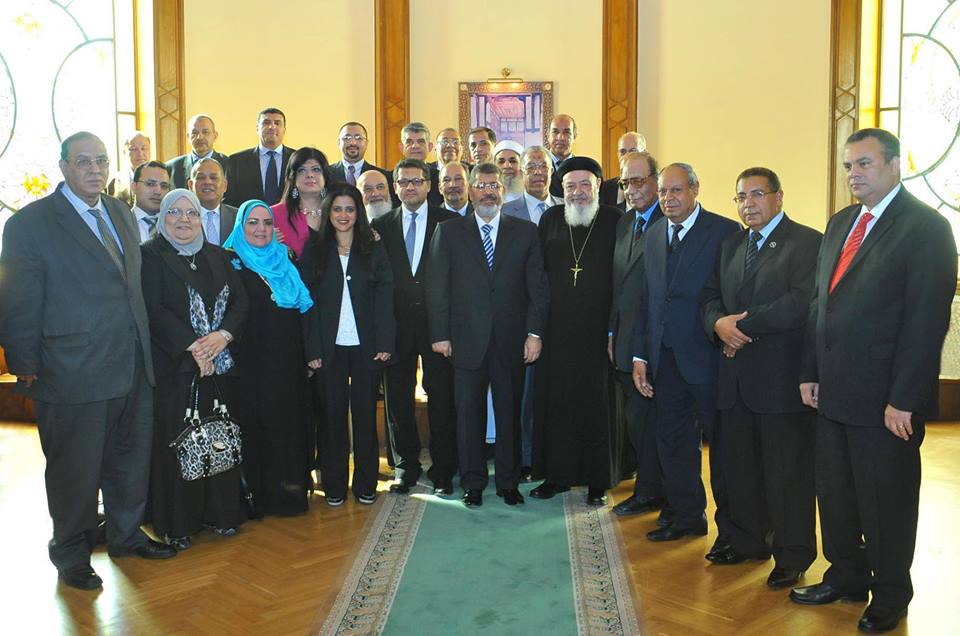 President Mohamed Morsi met with the head of the General Union for Civil Society Associations and Institutions, Hatem Khater, on Saturday. The meeting took place at the presidential palace and was attended by board members of the union.

According to a statement released by the presidency, the union “expressed its gratitude for holding the first meeting of its kind in the union’s history which bore many significant signs reflecting President Morsi’s acknowledgement of the [NGOs’] role in society.”

Morsi and the union members present spoke on several issues, including the demands by civil society organisations with regards to the establishment of a partnership between NGOs and the executive authority. This cooperation is “not only through application of the law but also through lawmaking and monitoring of the execution and contributing to the development of various sectors”, the statement said.

“The union further pointed to a few bureaucratic obstacles facing their work and the need for an appropriate legislative environment.” The presidency pledged financial support to civil society organisations to be allocated from the state’s budget after the union said it hopes to obtain roughly EGP 10 million-worth of support from the state budget.

Morsi reaffirmed in his meeting the significance of civil society and its role as “one of the major pillars of the development triangle”, telling the attendees he is eager to provide all the support he can in ensuring their freedom to perform their roles.

The president continued by saying there is a need to enhance communications between such organisations and state apparatuses, as well as a need to integrate them in order to “guide society towards production and development”.

This revision, the statement said, is to be “the foundation of a new phase of freedom in civil society work through which civil societies can take on their roles in developing the nation. In this context, the president also reaffirmed his keenness to refer the bill to the union for discussion.”

Morsi told the union they are expected to care for the poor “as a means for achieving social justice in addition to raising the level of general awareness, knowledge, and socialisation on the nature of the role of civil society” in the coming period. He also said there is a need to integrate unions and NGOs and to expand benefits of services. He continued by adding that the union must play a part in “communicating with its regional and international surroundings for the purpose of introducing activities of civil association in Egypt and correcting misconceptions about them abroad”.

The meeting came at a time when the draft NGO law has attracted a lot of criticism from civil society groups and the international community. Earlier in May the United Nations High Commissioner for Human Rights, Navi Pillay urged the government to take steps to ensure the current version of the draft law is made available for careful examination by both Egyptian and international human rights experts. Pillay also urged the recommendations made by these experts be taken seriously and used to ensure the law complies with international standards before the Shura Council adopts it.

The Egyptian Organisation for Human Rights also expressed worry over the draft law, as did Amnesty International, Freedom House and several other organisations. Some of the primary concerns include restricting the activities of foreign NGOs in Egypt and severe limitations on the ability of NGOs to conduct fact-finding visits and other such activities, according to Amnesty.