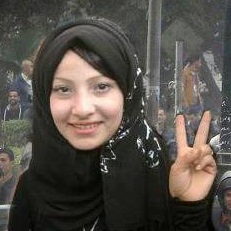 During last month’s Presidential Palace clashes 16 people were arrested for allegedly being involved in torching a police vehicle and attempting to kill a police officer, among other charges. While two of the accused were released earlier, and a ten more were released last Tuesday, four still remain in detention. One of the detainees is Basma Yehia, a minor who according to her lawyer suffers health problems.

Basma Yehia is 16 years old. Her lawyer, Ahmed Hassan, said she suffers from clinical depression and has received treatment. She is currently being held at the Abu Etata juvenile detention centre for underage girls.

Hassan said although the authorities have taken all necessary legal procedures regarding her detention, living conditions at the centre are not much better than being detained alongside adults.

Yehia’s father called Hassan last Friday to report she was in a bad state. Hassan said he tried to get her transferred from the centre to a more appropriate place to treat her depression but was unsuccessful. “In Egypt people look at psychological issues such as depression as a luxury,” Hassan said.

Of the original 16, the last four defendants are the hardest to deal with emotionally, Hassan said, adding that one other defendant, who he identified as Walid, had broken legs.

“When someone is arrested they are sent to the prosecutor,” Hassan explained. The prosecutor then decides whether or not the severity of the case and the available information warrants up to four days in detention. After the four days defendants should appear in court, where a judge may rule whether or not an extension of up to 15 days is applicable.

“They never got the chance to appear before a judge,” Hassan explained. “The first time we saw a judge was last week and the next time will not be for another month.”

Yehia’s previous lawyer, Mahmoud Belal, said she is being accused of beating police officers, attempting to murder another, burning a police car and vandalising public property. “One of the police officers at the palace arrested her,” Belal explained. “Authorities told us they have photographic evidence proving Yehia was throwing rocks and the like, but we never saw any of the videos and photographs they claimed to have,” he added.

“She is just a child in a big case facing dangerous charges,” Belal said.