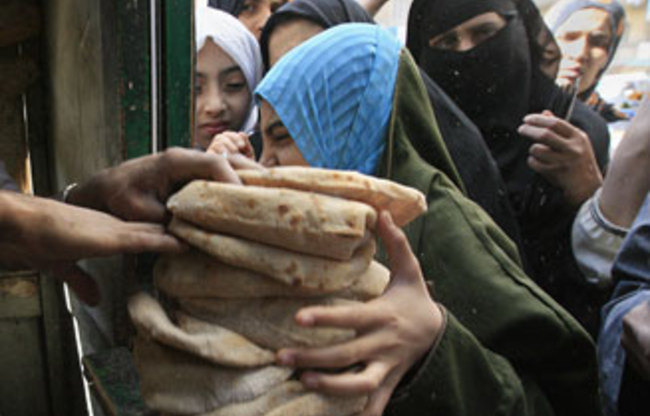 The percentage of food insecurity increased in Egypt by three per cent from 2009 to 2011, says a recent international study.

A joint report released on Tuesday by the World Food Programme (WFP), the International Food Policy Research Institute (IFPRI) and the Central Agency for Public Mobilisation and Statistics (CAPMAS) stated that 13.7 million Egyptians suffered from food insecurity in 2011.

According to the report, 15.2 per cent of the population moved to poverty between 2009 and 2011, while only 7.7 percent moved out of poverty.

GianPietro Bordignon, WFP Egypt Representative and Country Director, stated that such an increase in poverty rates did not happen “overnight”.

“People’s inability to have adequate and nutritious food is largely attributed to rising poverty rates and a succession of crises,” Bordignon said.

The report also revealed that the rate of poverty in urban areas is rising faster than rural areas. Greater Cairo, for instance, has a larger number of poor and food-insecure people than rural Upper Egypt, although the latter has the highest poverty rate nationwide.

CAPMAS head Abou Bakr Al-Gendy stated that food poverty reflects on the health of children below the age of five. “A poorly-fed child under five years of age is likely to suffer from stunted growth or obesity.”

“A fully balanced diet is expensive,” Al-Gendy said, “that’s why the poor suffer from food-poverty.”

According to the paper, the ration card system, designed to provide those in need with subsidised products, suffers from a targeting in serious need of refinement. The system caters to 73 per cent of “non-poor” households, while at the same time excluding 19 per cent of the “most vulnerable” households.

The paper also highlighted severe leakages in subsidised products. The supply chain of the subsidised baladi bread, for instance, suffers from a 30 per cent losses and leakage. Baladi bread makes up 61 per cent of food subsidies.

“The current system is not targeted to those who need it the most,” Breisinger said.

The report concluded with listing a set of recommendations which helped other similar economies improve. These included: improving the supply chain efficiency of subsidised products to decrease leakage percentages, refining the targeting system for recipients of subsidies, and complementing and substituting nutrients in the subsidized food.