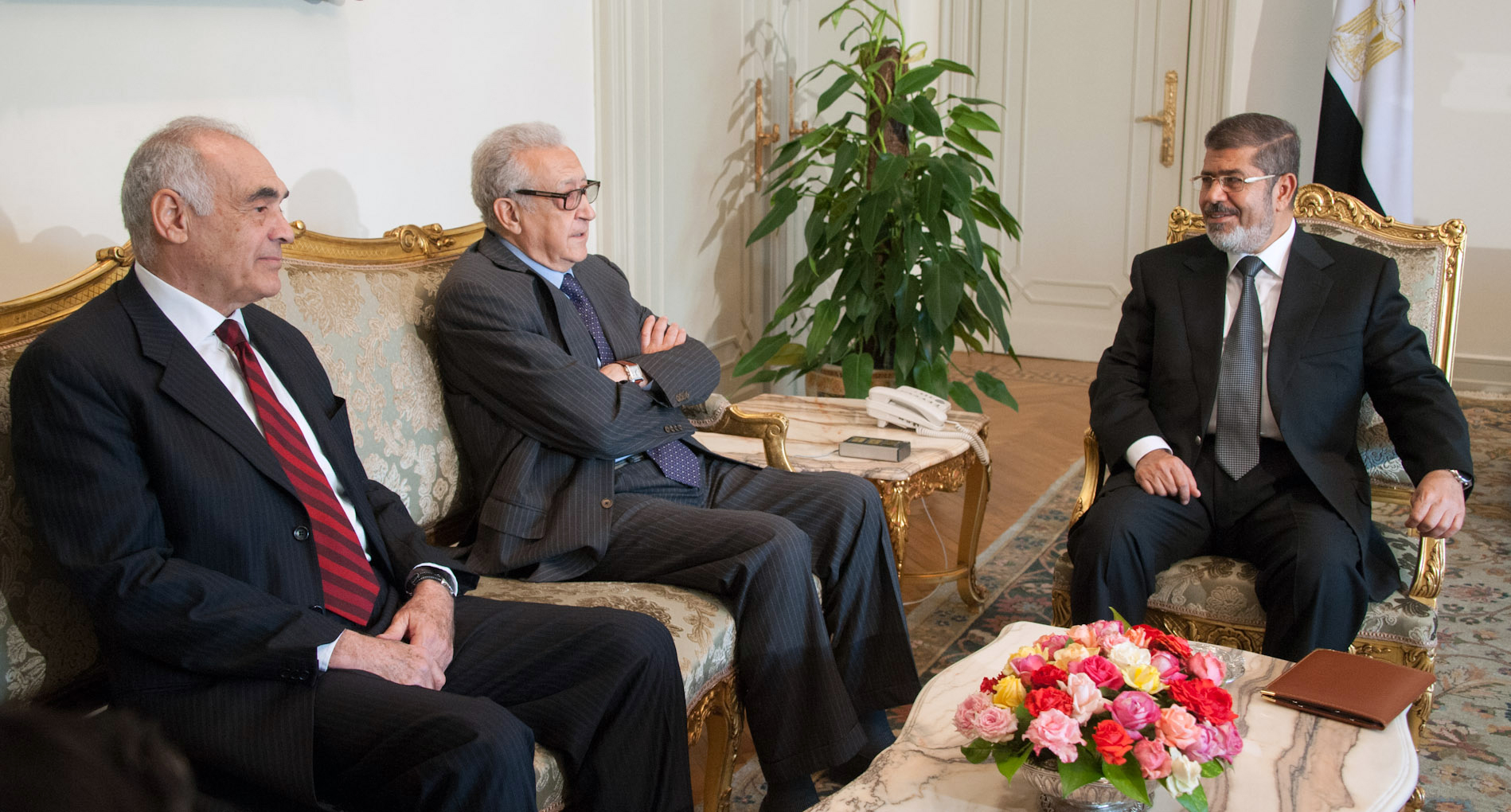 President Mohamed Morsi met with United Nations and Arab League Special Envoy to Syria Lakhdar Brahimi at the presidential palace on Monday. According to his spokesperson, Brahimi is pleased that Egypt is restarting its quartet initiative.

Brahimi and Morsi discussed the “latest developments in the efforts undertaken to resolve the Syrian crisis”, said a statement published by the presidency on Monday evening. Minister of Foreign Affairs Mohamed Kamel Amr also attended the meeting.

The trio discussed preparations for the upcoming Friends of Syria meeting, scheduled to be held in Amman on Wednesday. Amr is expected to attend along with his counterparts from Egypt, Jordan, Saudi Arabia, Qatar, the United Arab Emirates, Turkey, the United States, Britain, France, Germany and Italy.

During the meeting Morsi and Brahimi also discussed ways to coordinate between Brahimi’s efforts and Morsi’s quartet initiative, which aims to include Egypt, Turkey, Iran and Saudi Arabia to find a solution to the crisis. Morsi proposed the initiative at an Organisation of the Islamic Cooperation meeting in Mecca last August.

In the last month Morsi’s assistant on foreign relations and international cooperation, Essam El-Haddad, has travelled to both Iran and Turkey to discuss ways of reigniting the initiative. El-Haddad said at the beginning of May that there would be a ministerial quartet meeting “soon”.

Media spokeswoman for Brahimi, Khawla Mattar said: “Mr Brahimi is extremely interested in any initiative that could help [Syria] move forward. He was pleased when Egypt decided to revive its quartet initiative.” She added that Brahimi believes it is the kind of initiative that could promote a political solution.

The inclusion of Iran in Morsi’s initiative has been criticised by some, but Brahimi’s view, according to Mattar, is that it does not matter who takes part as long as they share the goal of bringing the opposing sides to the negotiating table.

As with previous Friends of Syria meetings, Brahimi will not be attending but could send one of his deputies in his place. Mattar stressed that Brahimi’s ultimate goal is for a political solution and to bring the interested parties to the negotiating table to agree on a solution. She added that any solution may not be perfect but would be better than the current situation.