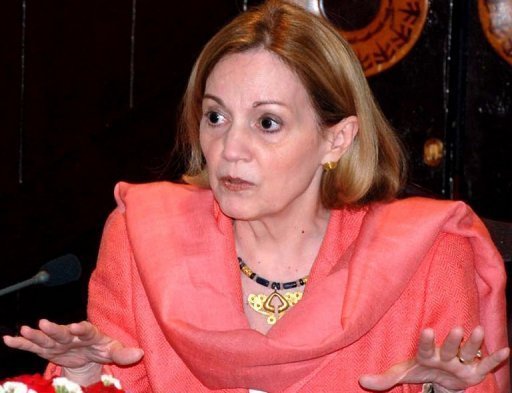 While the army’s role in Egypt’s transition was critical, it cannot be part of a political solution in a democracy, said United States Ambassador to Egypt Anne Patterson on Monday.

The ambassador, who has held her Cairo post since July 2011, discussed relations between her country and Egypt, along with Egypt’s current state of affairs during an evening interview on CBC satellite channel.

Patterson spoke of growing cooperation with the Egyptian military, especially as it pertains to Sinai, which despite the recent kidnapping of conscripts, the ambassador considered better off than it was one year ago.

However, she also noted that the volatile region still faced many challenges. “The situation has been aggravated by [smuggled] arms coming from eastern Libya,” she said.

The ambassador added that Egypt has never requested any amendments to the Camp David Accords. “The Camp David Accord is not only a centrepiece for Egypt’s security, but the security of the entire region,” she said. “There have been changes in the security pact,” she also said, asserting that there is a constant process of evaluating the situation in Sinai and possible solutions to improving security in the peninsula.

When asked about ongoing debates in the US Congress regarding financial assistance to Egypt, the ambassador said that the “administration will oppose any restrictions in the future,” a policy that has remained constant for the last few decades.

Loans to Egypt would be deemed effective if they help to provide economic stability and resolve subsidy issues, according to Patterson, who said that although her government was following ongoing negotiations between Egypt and the International Monetary Fund (IMF), that the United States was not actively involved in the discussions.

“You would expect to see a great outpouring of political activity to challenge Dr Morsi,” she said in response to President Mohamed Morsi’s declining approval rate, adding that campaigns like Tamarod should “certainly be encouraged in a democracy.”

During the hour-long interview, Ambassador Patterson was most critical of draft laws regulating the activity of nongovernmental organsiations (NGOs) and demonstrations.

“The ability of NGOs to organise is a fundamental element of democracy,” she said. “We’re concerned about this law and we’ve had dozens of discussions with the [Egyptian] government [about it].” She said the draft law was worse than the one that existed under the previous regimes, especially in how it relates to foreign funding.

When discussing the draft protest law, Patterson stressed the importance of adherence to international standards, saying that the US government had provided Egypt with its own protest law that regulates demonstrations in front of federal buildings in Washington, DC.

The stateswoman dismissed allegations that the US Embassy was dealing more with the Muslim Brotherhood than other political factions. “We deal with the government because we have to,” she said, emphasising that the government in place was elected.

She said the embassy was always engaging other factions as well including other Islamist parties and members of the opposition.

“We support a democratic political process. Egyptians are going to have to decide what that process is,” she said.

The ambassador cited politically-motivated arrests of figures such as Ahmed Maher and the state of Egypt’s Christian minority as points of concern moving forward. “Copts are very scared and there are worrisome elements,” she said. “The government isn’t doing enough.”

She also said the state of women in Egypt was a longstanding concern that still involves much work. She said the US was working with the Ministry of the Interior to put together a programme to investigate sexual assaults.

The ambassador also cited high female unemployment and lack of female empowerment in economic, social, and religious contexts as major points of concern.

Patterson meanwhile praised the Egyptian army, saying by handing the government over to civilian control it had set itself apart from many militaries in the region, and dismissed the idea of the army playing a political role.

“Army rule is inconsistent with democracy in all parts of the world,” she said. “Their role is to protect Egypt’s borders.”

Patterson praised Egypt’s efforts to contribute to a peaceful resolution in Syria’s civil war, saying that given Egypt’s standing, its critical role was needed.

“We have suspicions of Iran; we don’t think they’re an honest player in this process and they are fueling the situation in Syria, but [the conflict] has to be resolved in a regional context,” she said.