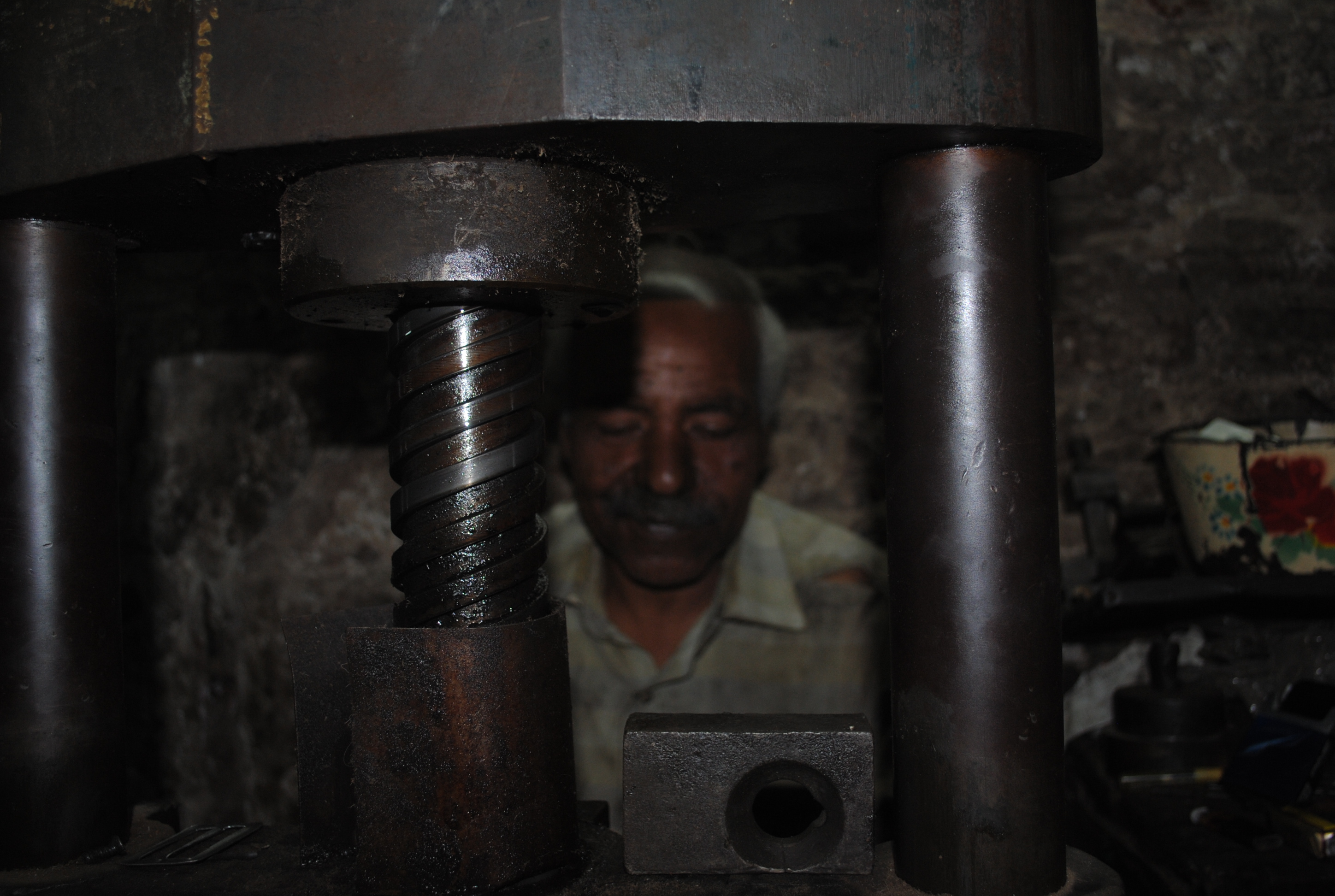 The winding, narrow streets of Old Cairo behind Khan El-Khalili have traditionally been bustling with an array of economic activity. Today, nestled among the ancient houses and mosques of the Fatimid era, many traditional workshops still remain, defying modern trends and contemporary production practices alike.

These little holes-in-the-wall, and the streets where they make their home, are filled with the rattling, clunking music of the work within, accompanied by recitation of the Quran from a nearby radio.

Known as the Khan Abo-Ta’ya or Haret El-Yahoud, (the Jewish Quarter), the area is among Khan El-Khalili’s primary providers of the glittering souvenirs (necklaces, pendants, etc.) which fill its boutiques and draw in tourists.

“We can work with any type of core material, be it gold, silver, copper or anything else,” said Mohamed Zaki, a 64 year old craftsman who has been in his profession for 50 years. “We even used to work with ivory imported from African countries before it was banned many years ago.”

Zaki and his fellow workers provide the bazaars with the little silver or painted parts which are integrated in ornaments and souvenirs. “These tiny objects cannot be manufactured by modern industrial devices; we are their only makers,” he said.

The work is always customised; traders come to Zaki’s workshop and provide him with an image of what they need or give him general guidelines so he can produce the item in question.

The craftsmen in the area still use the same working procedures and instruments they were taught to use 60 years ago. They start by breaking the primary material, whether copper, tin or otherwise, into small pieces, and then mould these pieces into the desired shapes by using specially-made metal stamps that are used in traditional machines.

While the craftsmanship practised here may have remained largely untouched over the years, the area has seen its share of changes. Zaki said that the Khan used to have a special scent, emitted by those ancient crumbling buildings which have long since been razed and replaced by small houses. “During my youth I used to see our elders wearing galabeyas, remarkable turbans and traditional clothes which belonged to former times. They looked as if they were directly out of the Fatimid era and they used to have great standing in the neighbourhood, but those customs are now forgotten.”

Zaki remembers the days of his youth as “the time of gracefulness and beauty” and compared it, full of sorrow and grief, to the current situation. “Before, Egyptian workmen used to enjoy a good international reputation; we used to get paid well and life was simple. Being a successful craftsman or workman was the ultimate goal for anyone, unlike today where this kind of life has become a misery,” he said.

These days the prominent traders and merchants of Khan El-Khalili tend to neglect the local workmen, and instead use workers from India, China and other Asian countries who have been more successful in securing work, even though these contracts require hard currency as payments.

To restore Egyptian craftsmen to their former prominence, the profession’s revenues must be sufficient enough to attract new blood. This will only happen when the industry receives technical and financial support from the government, in addition to creative marketing policies implemented by both the government and the private sector. “A new comprehensive programme must be designed by the Egyptian government in conjunction with the top banks to resurrect this vanishing profession,” Zaki said.

We left Mohamed Zaki in the same place where he has spent the past 50 years of his professional life, and where he still continues to apply his craft with the same passion and dedication he first brought to the job. The small workshop is his whole world; he did not get married because, as he said, he did not want any of his children inherit their father’s tough profession, and as he goes about his work he hopes that better days lie ahead.