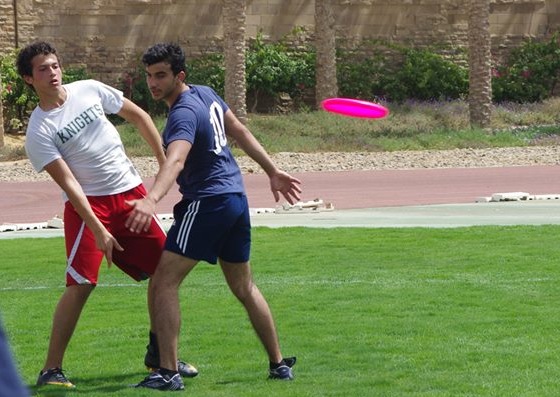 The American University in Cairo (AUC) hosted a tournament for Egypt’s Ultimate Frisbee teams last Saturday.  The Cairo American College (CAC) Destroyers, the AUC Knights, the Alexandria Ultimates, and the Gezira Youth Club played off in a tournament that had been announced earlier in the month.

The weather on the day of the tournament was cloudless, hot, and windy.  Peter Volkmar of the Destroyers started his team’s warm-up by explaining, “This is the problem for Frisbee as a sport; games are always messed up by the wind.  Short passes are the only way we will get through the game.”

Frisbee is a non-contact sport played by two seven-member teams on a football field.  No player may run with the disk or hold onto the disc for more than ten seconds without passing to a teammate.  To acquire the disc, the defending team must grab it from the air mid pass or knock it to the ground causing a turnover.  A point is scored by catching the disc in the opposing team’s end zone similar to a point in American football.

The first team to get to 11-15 points, depending on the tournament’s rules, wins.  Usually, if the game lasts for more than fifty-five minutes then the team with a point lead wins once they score their next point.

Gezira Youth Club played well, with two of their more experienced players on the pitch.  They won their first game against AUC (9-3) and then the Destroyers (10-6).  However, their assembled team was the smallest in numbers, which meant each player had to play longer in the day’s heat and by their final game against Alexandria they had no substitutions to relieve exhausted players, forcing them to forfeit their match against Alexandria.

In general, Frisbee players pride themselves on keeping games friendly and inviting, and this tournament was no different as teams applauded their competition’s victories throughout the day.  “We try to keep it light,” said Willy Gu, Destroyer’s player and one of their unofficial coaches.  While teams would usually put up their all-stars in the second half of the game if the score was close, the teams at the tournament usually allowed all players equal time on the field.

Gezira’s exit became the Destroyers’ opportunity.  The Destroyers had earlier started the day by defeating the Alexandria Ultimates’ (9-8) and AUC (11-7), but losing to Gezira (6-10).  Alexandria had beaten AUC and held the lead against Gezira until the team forfeited.  That meant with Gezira gone, the Destroyers and Ultimates would face off for a second time the same day for a final championship round.

The morning match up had come down to the wire and there was no guarantee that the Destroyers, which had suffered from a couple of injuries During the Gezira match, could prevail a second time, but the wind that had plagued the matches throughout the day had died down somewhat by late afternoon.  The Destroyers proved better accuracy and passes across field and quickly built a lead that lasted until they won, crowning them the tournament champions (11-8).

Egyptians made up the vast majority of players in Saturday’s competition Alexandria’s team was completely made up of Egyptian citizens.  This tournament represented the first time when four distinct teams that met regularly to train and strategise met to compete.

Ahmed Amr Elsoud, who is known to his teammates and on his team shirt as ‘Siwa’, started playing Frisbee for the first time when he learned about the game during the Ultimate Sacrifice tournament took place in the eco-lodge that he ran with his family in Siwa Oasis.  Now he says that he wants to start a website that “will list the training times, contact persons, and locations for Frisbee teams in Egypt”.  He says: “No one who moves to Egypt knows how to find the teams here, but if we make a website then we will be able to grow faster.”

In addition, he also hopes to create a nationally recognised team that will be able to represent Egypt abroad and receive funding from the government.

Neal Hussein has played Frisbee in Cairo for the past five years and played for the CAC Destroys in this tournament.