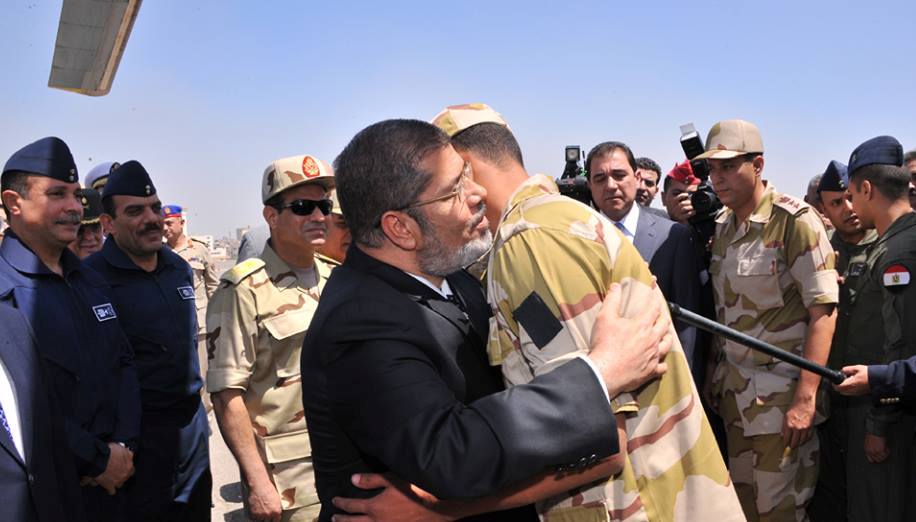 “All criminals will be punished and the Egyptian military is stationed all over the country, protecting all of its lands with strength and pride,” President Mohamed Morsi declared on Wednesday.

Morsi met the seven freed soldiers who had been kidnapped since Thursday in Sinai at the Almaza military airport, where they were brought following a successful operation to free them was carried out by intelligence agents.

Military spokesperson Colonel Ahmed Ali made a statement early Wednesday announcing the seven soldiers had been released following a successful operation carried out by military intelligence personnel with the help of Sinai tribal elders and sheikhs.

“A drop of blood from one of our soldiers or the people of Sinai is more valuable than anything,” Morsi told reporters at a press conference he held alongside Prime Minister Hesham Qandil and the defence and interior ministers.

Morsi thanked the military, the Ministry of the Interior and intelligence leadership, and congratulated them on successfully freeing the kidnapped soldiers without bloodshed, calling the operation an excellent model for how different state institutions should cooperate.

Finally he thanked Director of the General Intelligence Service (GIS) Major General Raafat Shehata and the “honourable people of Sinai” for providing support for the military and GIS.

Morsi called on all armed groups and militants in Sinai to lay down and hand in their weapons, proclaiming that only the state, represented in the military and the police, has the right to carry weapons.

“Those who have weapons must hand them in and anyone with a complaint is welcome to submit it. The law and the nation are above all and we cannot be blackmailed nor will we be pushed into taking reckless actions,” he said.

The president also asserted “Sinai was safe and stable” and that all those guilty of any wrongdoing would be punished, adding that force must be used in Sinai to achieve peace and security for its people.

He went on to promise he would work to solve the political, social, economic, health and educational problems faced by the people of Sinai.

“These are your rights, just like they are the rights of every single Egyptian citizen, and Sinai is a part of this nation’s flesh and blood; all of those who populate its land are my responsibility,” Morsi said.

He also called on all who care about Egypt, including the opposition, to unite for the good of the nation and so that “we can become the true sons of the 25 January revolution” and achieve its goals.

“We will continue our excellent performance, and we value the opposition. We are on the road to electing a new parliament, we hold ministers accountable for their actions every day. We are not warmongers, but we are perfectly capable of achieving security in and outside our borders and protecting stability and development.”

Unidentified gunmen kidnapped seven off-duty security personnel on Thursday; six of them belonging to different sections of the Ministry of Interior and one having been a military volunteer non-commissioned officer with the Border Guards.

The kidnappers released a video of the soldiers on Sunday depicting them blindfolded and bound. They had one of them recite their demands, which are the release of Sinai political prisoners.

Details on the operation that freed the soldiers are yet to surface. Despite the military and police shipping in tanks, armoured vehicles, heavy weaponry and personnel into North Sinai ahead of a possible armed rescue effort, the hostage crisis was eventually solved peacefully with the president repeatedly asserting that “no blood was spilt.”