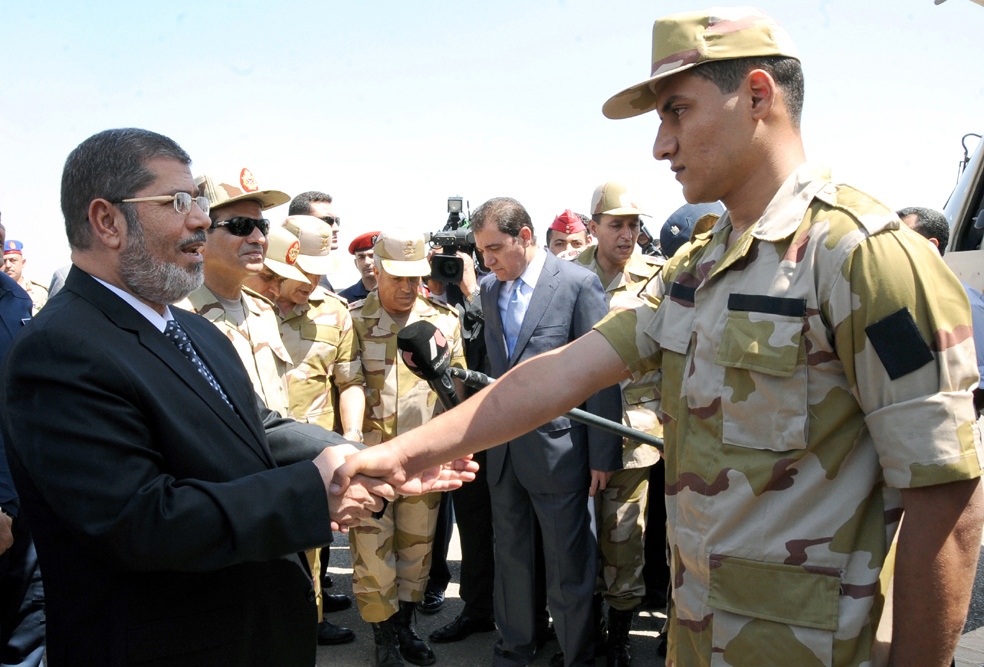 Authorities have detailed information about the Sinai kidnappers but feel it is not the right time to reveal it because intelligence operations are still underway, a military spokesman has said.

At a joint press conference by the presidency, cabinet, military, and police, military spokesman Colonel Ahmed Ali said that military operations over the past two days contributed greatly to the efforts of military intelligence personnel, who were largely responsible for the release of the kidnapped soldiers.

“I want to affirm that the military operations over the past 48 hours were only a short-term goal and that we have long-term goals that might be compromised by releasing this information. We have been operating in Sinai since August 2012 – not just two days ago,” he said.

Ali would not reveal exactly how the seven soldiers were rescued but stressed several times that the military and police mobilisation in North Sinai since Monday greatly helped the “efforts” of military intelligence personnel and Sinai tribal elders through what he called “strategic deception”.

“The armed forces did not release a single statement since the kidnapping in an effort to confuse the kidnappers. Furthermore, several news agencies carried conflicting reports on sizes and locations of military operations in Sinai which also contributed to the deception effort,” said Ali.

He added that Operation Sinai, which started in August, had already successfully destroyed over 200 tunnels threatening Egypt’s border security.

Presidential spokesman Ehab Fahmy congratulated the military, police, and General Intelligence Service on a successful mission and said that the presidency had created a troika managing committee as soon as the soldiers were kidnapped.

“I want to make this clear, the soldiers were released without there being any negotiations, deals, settlements or compromises made by the state,” he said.

Fahmy repeated President Mohamed Morsi’s calls earlier on Wednesday on all armed groups in Sinai to hand in their weapons to the authorities, and thanked Sinai sheikhs and tribal elders for their role in resolving the crisis.

He also said the only reason the operation took so long was because the presidency and security apparatuses wanted to ensure whatever course of action they took would not harm civilians in Sinai.

Police spokesperson Major General Hani Abdel Latif asserted that the soldiers’ release was “not the end” and that the authorities would bring the kidnappers to justice soon.

“With the help of the armed forces we will be resuming our security duties in North Sinai. The Ministry of Interior contributed to the military operation with 30 armoured personnel carriers and 100 fighting units,” he said.

When asked about the fate of four police officers kidnapped in Sinai two years ago, Abdel Latif said the two situations were different and that the interior ministry was exerting its “full efforts” into finding them and that they “still have hope”.

Unidentified gunmen kidnapped seven off duty security personnel on Thursday; six of them belonging to different sections of the Ministry of Interior and one a military volunteer non-commissioned officer with the Border Guards.

The kidnappers released a video of the soldiers on Sunday depicting them blindfolded and bound. They had one of them state their demands, which were the release of Sinai political prisoners.