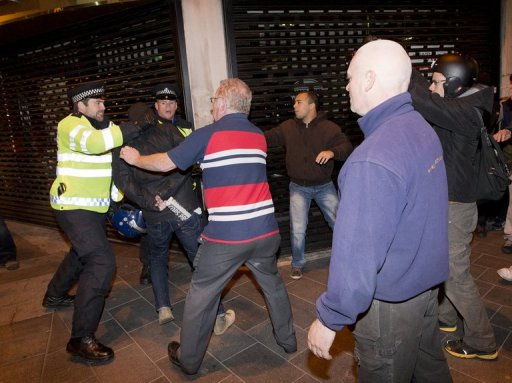 AFP – Police arrested two people as they tried to quell anti-Islamist disorder following the brutal murder in London of a man, believed to be a soldier.

A 43-year-old man was arrested in Braintree, east of London, late on Wednesday after reportedly walking into a mosque with a knife shortly after news broke of the London murder.

Elsewhere, a man was in custody in Gillingham, south east England, on suspicion of racially aggravated criminal damage.

Eyewitnesses to the horrific London attack described how the two suspects set upon a man in the street in broad daylight with knives and a gun.

They then stayed at the scene, asking passers-by to photograph and film them.

Armed police shot and wounded the two attackers after being called to the incident in Woolwich, south east London, by bystanders.

Prime Minister David Cameron has said the attack appeared to be terror-related.

In the hours following the attack, around 250 supporters of the anti-Islamist English Defence League (EDL) gathered at Woolwich Arsenal train station.

The group hurled bottles and became involved in minor skirmishes with the police, but later dispersed without any arrests being reported.

EDL leader Tommy Robinson was among the crowd and explained: “They’re chopping our soldiers’ heads off. This is Islam. That’s what we’ve seen today…

“Our next generation are being taught through schools that Islam is a religion of peace.

“It’s not. It never has been. What you saw today is Islam,” he added. “Everyone’s had enough.”