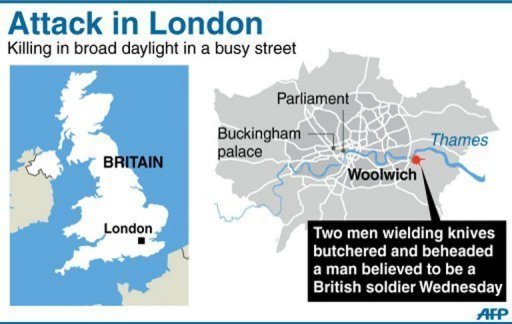 By Guy Jackson (AFP) – Britain’s intelligence services came under pressure on Friday to explain how they let two Islamic extremists suspected of hacking a soldier to death in the streets of London slip through their net.

Both of the men, under armed guard in London hospitals after being shot by police at the scene, were previously known to the intelligence services but were reportedly assessed as not posing a deadly threat.

One of the men, identified as Michael Adebolajo, 28, had attended meetings of a now-banned Islamist group and reportedly sold extremist leaflets in Woolwich, south London, where the attack took place on Wednesday.

Adebolajo had reportedly tried to travel to Somalia to fight alongside the country’s Shebab insurgents but had been turned back and had his passport confiscated by police.

He was captured on film shortly after the attack near a barracks in Woolwich holding a bloodied knife and meat cleaver and claiming he had killed soldier Lee Rigby because British soldiers killed Muslims every day.

“It is an eye for an eye and a tooth for a tooth,” he says in the footage.

Both Adebolajo and the other suspect, named as 22-year-old Michael Adebowale, are the children of Nigerian immigrants.

As police tried to piece together how Adebolajo apparently went from an outspoken convert — he became a Muslim in 2003 — to a cold-blooded murderer, the government was forced to defend the security services against criticism they missed signs which might have helped prevent the grisly murder.

A parliamentary committee will look into the role of the security services, but communities minister Eric Pickles said even if the men had been known to intelligence agencies, it was impossible to keep tabs on everyone all the time.

“Peers and MPs will do a thorough investigation in terms of what the security forces knew, but I’ve seen experts on security explaining how difficult it is in a free society to be able to control everyone,” Pickles told BBC TV.

“There is a world of difference between holding extreme views and committing murder.”

A former senior intelligence officer said it was extremely difficult to detect attacks of the type seen in Woolwich even if the suspects had been known to authorities for years.

Richard Barrett, the former head of counter-terrorism at Britain’s foreign intelligence service MI6, said: “I assume that these people are probably coming out of a small group without, necessarily, any overseas connections or any other broader connections in the United Kingdom which could come to the attention of the security services more than they did.

“When does a person who expresses radical views, who joins a radical group, flip over to be a violent extremist?

“To find the signals, the red flags as it were, I think is enormously hard,” he told the BBC’s Newsnight programme.

Police were on Friday questioning two further suspects, a man and woman, both aged 29, after they were arrested in raids for conspiracy to murder.

Officers searched five properties in London and one in a village in Lincolnshire, eastern England, where Adebolajo once lived.

“He used to attend some of our activities over the years. Very peaceful chap actually, not violent at all,” Choudary said.

Adebolajo was pictured on the front of the Daily Telegraph newspaper clashing with police in 2006 outside the trial of a suspected fanatic at the Old Bailey court in London, when he argued he had the right to “behead those who insult Islam”.

Meanwhile, the Help for Heroes charity for wounded troops has seen a huge surge in donations after it emerged that Rigby had been wearing one of its t-shirts when he was killed.

Amid fears of a backlash against Muslims, more than 1,200 extra police have been deployed in London, especially around sites of religious worship and transport hubs, but there were no reports of any reprisals overnight Thursday.