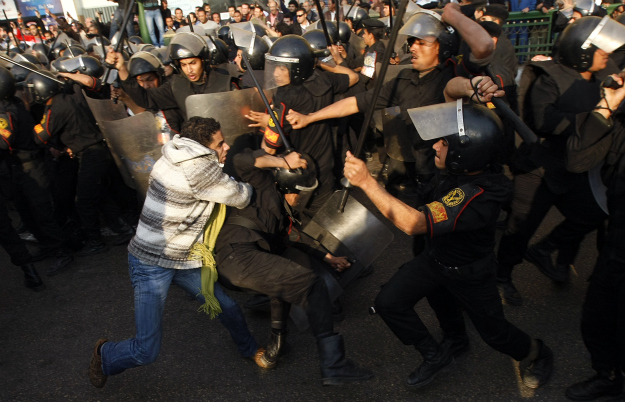 The report cited examples of torture cases at the hands of security personnel. It stated that Egypt did not apply any legal or political amendments to end torture recently; neither during the Supreme Council of the Armed Forces’ (SCAF) rule, nor during that of President Mohamed Morsi.

“Protesters arrested by riot police or the military were subjected to severe beatings and electric shocks in custody,” the report read. It specifically mentioned Tora Prison, south of Cairo, where “detainees also suffered overcrowding, inadequate clothing and lack of medical care”.

The report also stated that some male detainees were kidnapped and taken to unknown locations where they were subjected to electrocution and sexual abuse to force them to admit their participation in protests.

Excessive use of force by security forces was also criticised by Amnesty International. The human rights organisation stated that during most demonstrations involving clashes between pro and anti Morsi demonstrators, security forces were “largely absent”. Other times, security forces’ presence came in the form of clashing with protesters, the report read.

The report also condemned the phenomenon of impunity among security personnel accused of killing protesters during the 25 January Revolution. Despite describing the verdict sentencing ousted President Hosni Mubarak and his Minister of Interior Habib El-Adly to life in prison as “historic”, the report criticised the acquittal of almost all other accused security personnel.

The report called for holding all implicated security personnel accountable for such acts. A copy of the report was sent to the Egyptian authorities.