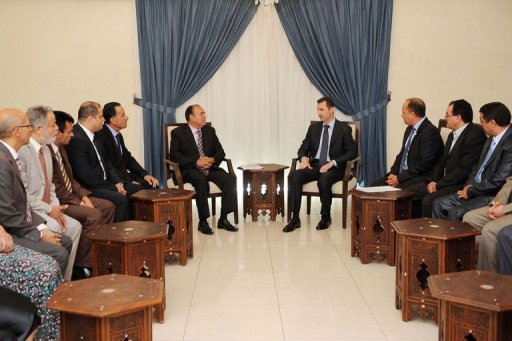 By Dmitry Zaks (AFP) – MOSCOW — Syria’s most powerful ally Russia said Friday that the Damascus regime had agreed “in principle” to attend an international peace conference on the crisis that world powers hope will take place in Geneva in June.

But Moscow also criticised Syria’s various opposition groups for presenting tough demands that in some cases included the exclusion of President Bashar al-Assad’s representatives from the negotiations.

“We note with satisfaction that we have received an agreement in principle from Damascus to attend the international conference in the interest of the Syrians themselves finding a political path to resolve the conflict,” Lukashevich told reporters.

Russia is seen as the nation exercising the strongest influence over the Syrian regime thanks to years of military and other cooperation that stretches back to Soviet times.

Moscow has in recent weeks also been keen to show its diplomatic influence in the region by ensuring that Assad’s representatives attended a conference agreed this month by Russian Foreign Minister Sergei Lavrov and his US counterpart John Kerry.

Some European media have reported that the meeting has been already tentatively scheduled for June 10, with the focus on ending 26 months of bloodshed that a Syrian observer group says has claimed more than 90,000 lives.

But Lukashevich said reports of a specific date for the conference “cannot be taken seriously” because the ranks of Assad’s foes remained so split.

“Demands to immediately name a specific date for the conference without having clarity about who — and with what authority — will speak in the name of the opposition, cannot be taken seriously,” Lukashevich said.

Syria’s main opposition group entered a second day of talks in Istanbul on Friday aimed at finding a joint approach to what has already been been dubbed as the “Geneva 2” conference.

The first Geneva meeting in June last year ended in a broad agreement aimed at forming a transition government in Syria and introducing a long-lasting truce.

But the deal was never implemented because of disagreements over Assad’s role in the new government and neither side’s decision to lay down their arms.

Lukashevich on Friday condemned some opposition leaders for declaring that no talks were possible with Assad still in power.

Moscow has insisted that the talks be held without preconditions — a demand that appears to clash with the Damascus regime’s own insistence that Assad’s future not be addressed at the conference.

Lukashevich scorned the attempts by the opposition to find a common voice, saying the reports he has seen thus far coming out of Istanbul “have not been encouraging.”

“We are again hearing about the precondition that Bashar al-Assad leaves power, and that a government be formed under the auspices of the United Nations.”

Regional and Western backers of the anti-Assad uprising also pledged in Amman this week to boost their assistance to the rebels should the regime fail to commit to a peaceful political transition.

Lukashevich said that “everything is being done” by the opposition and their regional allies to make sure that the Geneva conference either does not take place or fails.

But he stressed that the United States and Russia were now undertaking joint efforts to make sure that sufficient agreement was reached for the sides to talk to each other soon.

Lukashevich added that Lavrov and Kerry would be meeting to chart their progress in Paris within a matter of days.