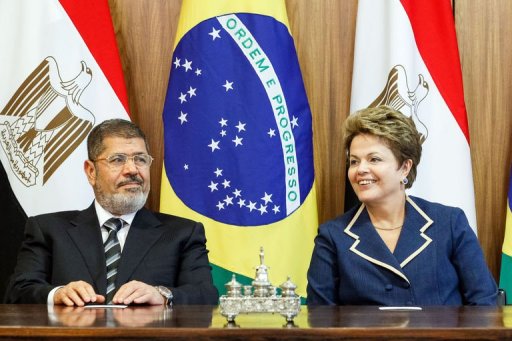 President Mohamed Morsi’s visit to Brazil earlier this month in which he called on investors to tap into Egypt’s market seems to have reaped fruit.

Camargo Correa Group, one of Brazil’s largest private conglomerates, has already pumped in more than EGP 1.9bn worth of investments into Egypt, according to local media reports. The investment is aimed to foster employment and boost investors’ confidence in the country’s economy, the reports said.

“Egypt has been selected from four countries in the Middle East, Turkey, Tunis, Morocco, as the best country to pump investments in,” said Ricardo Barbosa, business director of InterCement Brasil, the cement division of the conglomerate group, according to a statement posted on the company’s website.

Barbosa added that Egypt has the potential to recover from the current political transition.

“Morsi’s visit to Brazil was reassuring to Brazilian investors and businessmen regarding the investment atmosphere in Egypt,” he said.

The president’s trip earlier this month was focused on finding economic opportunities and strengthening bilateral relations between Egypt and Brazil.

His trip to Brazil was the last in a tour of the BRICS countries, as he had already visited the other four member states, Russia, India, China and South Africa.

Morsi pledged for Egypt to join the BRICS bloc during his visit to India two months ago where the announcement was publicised in an Indian newspaper.

“I am hoping BRICS would one day become E-BRICS where E stands for Egypt. I hope E-BRICS would emerge when we start moving the economy,” he said during his visit.

Morsi lauded the proposal for the establishment of a BRICS bank that would “support countries to achieve high growth rates and supplement the role of the IMF, World Bank and similar institutions”.

BRICS encompasses a bloc of the world’s large, growing economies, which are originally projected to overtake the current major global economies in the first half of the 21st century.

Morsi’s frequent visits abroad have come in an attempt to address the ailing economy as the country’s foreign currency reserves have dropped to $13.5bn for this year.