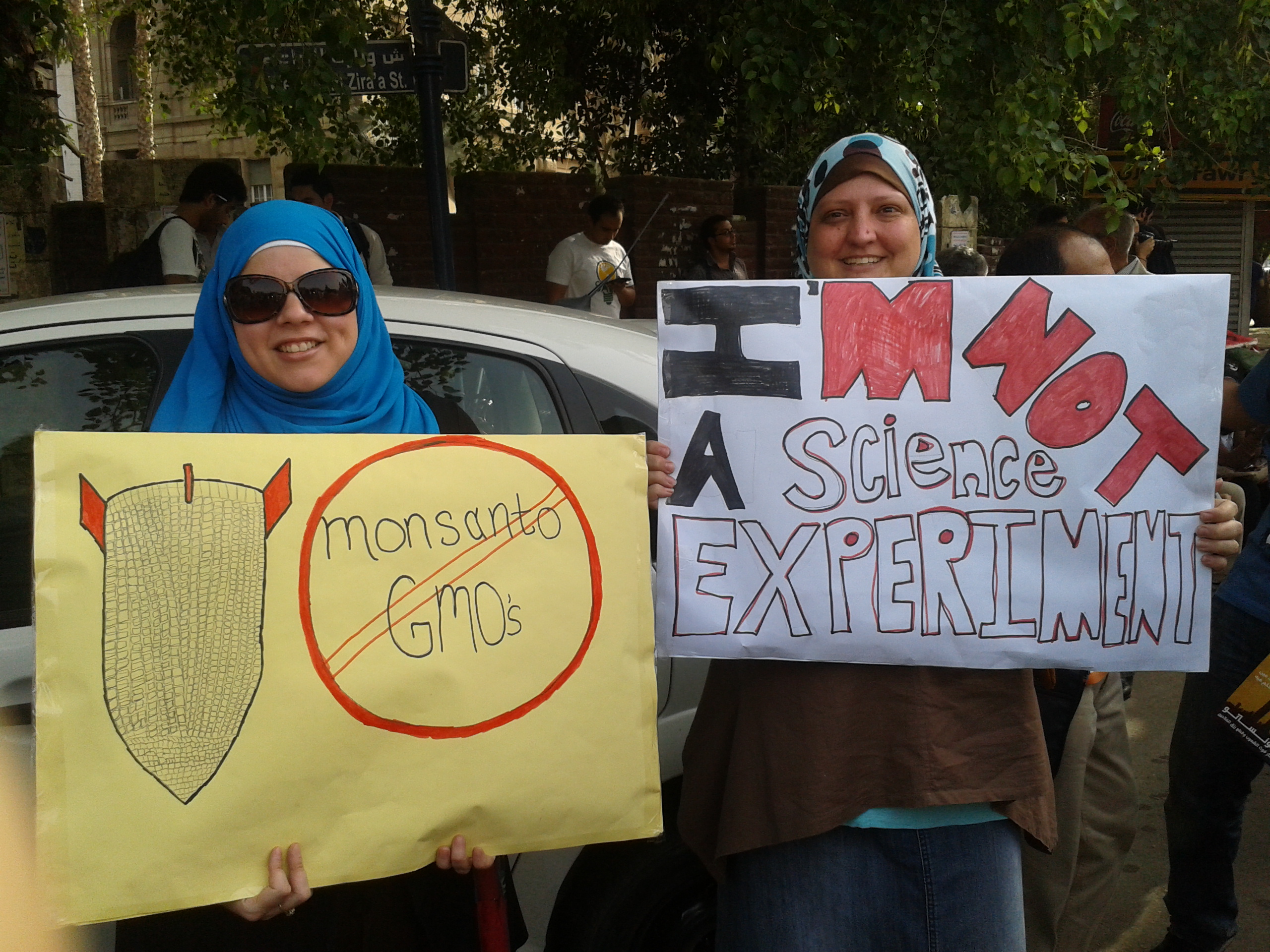 Egyptians took to the streets Saturday afternoon as part of a global protest against the agricultural biotech company Monsanto and their genetically modified (GM) crops. The protest is aimed at raising awareness surrounding Monsanto’s aggressive business practices and growing concerns of potentially adverse side-effects GM crops may have on humans.

Dozens of people appeared in front of the Ministry of Agriculture in Dokki, Cairo, to protest Monsanto crops. The participants expressed worry that Monsanto could seriously harm Egyptian farmers, although the aim of the protest was a global show of defiance against the multinational corporation.

Ahmed Hisham, a member of the Revolutionary Socialists, said the group was participating because they demand the suspension for any and all Monsanto-related activities in Egypt. They are also calling on the government to stop importing Monsanto seeds.

Monsanto’s patented GM seeds account for roughly 90% of the US seed market, according to the Egyptian Centre for Economic and Social Rights (ECESR) and as per their patent, retain the rights to any second or third-generation plants and seeds.

As a result of these rights, countless farmers in the US have faced lawsuits after GM crops spread into their fields, carried by the wind and birds, forcing them to pay a settlement or face lengthy and costly court battles against the multi-billion dollar company for infringing on their patents.

ECESR said in a statement that if such crops are allowed to continue, “Soon every farmer in the world will be forced to buy seeds from seed breeding companies, thus controlling the fate of the global food market.”

Monsanto seeds are genetically modified to withstand different conditions, depending on the client’s demands. The most common traits are pest-resistant strains such as the Mon 810, which excretes a protein Monsanto claims only harms insects from the Lepidoptera order: butterflies and moths.

ECESR said eating GM crops affects human genes, making the human immunity system weak against disease. “In an experiment conducted on mice which were fed hybrid and genetically modified potatoes, the scientists observed a change in their DNA structure and following generations became very weak and very sick,” ECESR said. “In fact, this is what happens with humans.”

Several studies, however, have brought into question whether or not the proteins excreted by the plants are also harmful to other species. Some studies have concluded that the proteins may also have an effect on bees, crucial for cross-pollination, and small mammals such as rats, although there is currently no evidence which conclusively establishes or rules out negative effects on humans.

The Revolutionary Socialists released a statement on Saturday in which they accused the Ministry of Agriculture of ignoring the warnings of genetically modified products by pursuing genetic engineering and allowing Monsanto “to continue destroying the health of the Egyptian people.”

“Monsanto has been operating in Egypt without consulting us,” ECESR said, referring to Monsanto’s GM corn produced in Egypt since 2008.

Monsanto has been involved in several lawsuits against farmers in the US and corruption chargers. In 2005 it was fined $1.5m for bribing an Indonesian official to silence a study on the environmental impact of its genetically modified cotton strains.

Earlier in May, the non-governmental organisation Food and Water Watch (FWW) released a report in which it highlighted how the US State Department aggressively pursues the biotech food industry’s agenda by imposing the “policy objectives of the largest biotech seed companies on often sceptical or resistant governments and public, and exemplifies thinly veiled diplomacy”.

The report analysed 926 diplomatic cables between the State Department and embassies and discovered the embassies were pushed to pressure foreign lawmakers to accept American seeds and to pressure governments, lobbyists and the public to accept GM crops.

One of Monsanto’s claims, defended by the US government, is that the crops are more resistant to herbicides such as glyphosate and less herbicide would be needed to maintain crops. According to FWW, a study done in 2012 found the use of such herbicides had actually increased; pointing out that glyphosate is proven to have a negative effect on animals and the environment, causing highly abnormal deformities and neurological problems in vertebrates. The increase in herbicide use is believed to be tied to a growing number of hyper-resistant weeds, the emergence of which is believed to be connected to the GM crops.

Another claim made by the US government and the biotech industry is that GM crops are highly regulated and safe for consumption. FWW was critical of this claim, saying that in most cases the biotech industry self-regulates when it comes to the safety of genetically engineered foods. This is a result of a decision made by the US Food and Drug Administration in 1992 which allows biotech companies to certify their own products without any safety-testing on the government’s part.

In 2008 Egypt, South Africa and Burkina Faso were the only countries using GM crops in Africa. FWW said the State Department has actively tried to promote pro-biotech rules and laws in Africa.

“To stop this human massacre, Egyptians will participate in a march against Monsanto,” ECESR said. “If the dark-side of globalisation rests within the power of giant corporations across international boundaries, the bright-side is global popular movements based on solidarity among the people.”

Other protests against Monsanto took place simultaneously in over 35 countries, in more than 100 cities.