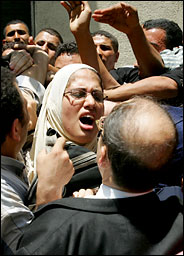 Saturday marked the anniversary of “Black Wednesday”, when a series of sexual assaults on female protesters and journalists occurred eight years ago in an attempt to intimidate them from participating in further demonstrations.

On 25 May 2005, the Kefaya Movement protested against ousted President Hosni Mubarak and the amendment to the constitution to pave the way for Mubarak’s son, Gamal, to become president.

During the protest, a group of thugs hired by the Ministry of Interior sexually assaulted female journalists and protesters, according to the Egyptian Initiative for Personal Rights’ (EIPR) blog.

The blog post revisited what happened that day, focusing on what befell the first victim, journalist Nawal Aly, who was sexually assaulted and almost stripped of her clothes, while high-ranking security officials and National Democratic Party members stood by.

Aly filed a report about what had happened to her, but the report was dropped since it was impossible to find the perpetrators, according to an EIPR statement.

Before she passed away from cancer in 2009, Aly and her fellow female journalists decided to seek help from the EIPR, who in turn filed a complaint to the African Commission for Human and Peoples’ Rights on 18 May, 2006, according to the EIPR blog post.

After seven years of investigations, the commission issued the verdict that the Egyptian government is to be blamed for this incident, and called for both a reopening of investigations and for compensation to be paid to the victims amounting to EGP 75,000 each, according to the EIPR statement.

Hossam Baghat, president of EIPR, said in the statement that the commission’s verdict is considered a positive achievement for women’s fight against their attempted exclusion from political rallies through the use of the “sexual assault weapon”.