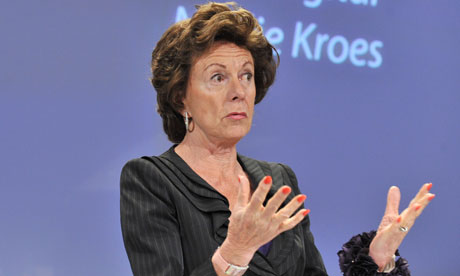 AFP – Europe’s Digital Agenda Commissioner Neelie Kroes on Monday welcomed a pledge by Egypt to maintain an “open” Internet that would not be subject to government shut downs, as was the case during the 2011 uprising.

Kroes, vice-president of the European Commission responsible for the Digital Agenda, met on Monday with Communications Minister Atef Helmy during a visit to Cairo.

“The minister and I are on the same page… We are believers in an open Internet, a free Internet, and not being blocked by a government for political reasons,” Kroes told reporters.

“We agreed that it is of the utmost importance to ensure that the Internet remains an open platform, that all attempts to fragment it into national ‘Intranets’ are resisted,” Kroes and Helmy said in a joint statement calling for “openness, inclusiveness, accountability, effectiveness, coherence and respect for applicable laws”.

Earlier this month, the European Commission unveiled plans for the Global Internet Policy Observatory (GIPO), an online platform to improve knowledge of and participation of all stakeholders across the world in debates and decisions on Internet policies.

In their statement, Kroes and Helmy said that Egypt pledged to “work together with the Commission and all other interested countries and stakeholders to develop GIPO as quickly and inclusively as possible, on the basis of a shared commitment to an open, unfragmented and rules-based Internet”.

The agreement hopes to avoid a repeat of a government-ordered Internet cut in January 2011 aimed at quelling an uprising against former president Hosni Mubarak that relied heavily on social networking for mobilisation.

During her visit to Egypt, Kroes also met with several civil society members who expressed concern over restrictions on freedom of speech, in light of several recent court cases for insulting religion and President Mohamed Morsi.

“There is still a great deal of concern about what opportunities NGOs are getting,” Kroes said, saluting the “inspired and very capable people who are active in these groups”.