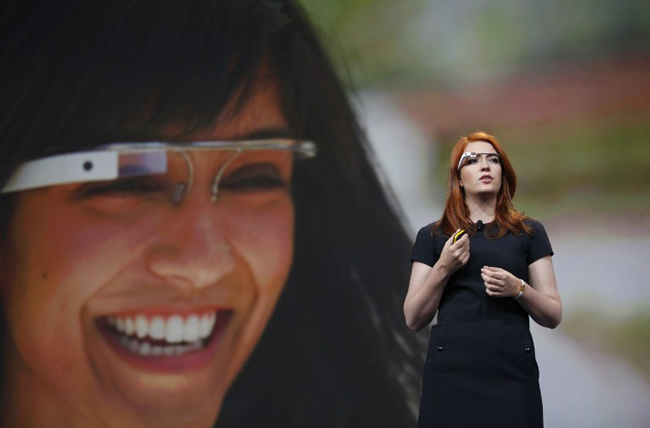 (AFP) – Apple chief Tim Cook on Tuesday said he sees promise in computers shrunk down and worn like watches or other accessories, but drew the line at Internet-linked eyewear such as Google Glass.

Google Glass is “not likely to be a mass market item” but Apple is “incredibly interested” in the broader area of wearable computing, Cook said in an on-stage interview at an AllThingsD conference in California.

He predicted there will be “tons of companies playing” in the wearable computing sector but sidestepped a question as to whether Apple would be among them with the creation of a rumored “iWatch” device to be worn on the wrist.

“I don’t know a lot of people that wear (glasses) that don’t have to,” a bespectacled Cook said in a sideways shot at Google Glass.

“The wrist is interesting,” he continued in comments live-blogged by AllThingsD. “You still have to convince people it is worth wearing. Most young people don’t wear a watch.”

Google Glass was a common sight early this month as software savants shared visions of games, weather reports, news and more delivered to the Internet-linked eyewear at a San Francisco developers conference.

Many developers attending an annual Google I/O event sported Glass as part of an “explorer” program to tinker with creative applications for the eyewear, which cost $1,500 a unit.

Glass connects to the Internet using Wi-Fi hot spots or, more typically, by being wirelessly tethered to mobile phones. Pictures or video are shared through the Google Plus social network.

Google executive chairman Eric Schmidt said recently that it will take “a while” before consumer versions of Glass are available.

Cook rejected the notion that Apple has lost its cool factor and said he was not worried about pressure from competitors such as Samsung, which has seized the crown as the world’s top smartphone maker.

“Absolutely not,” Cook coolly replied when asked whether the California company was in trouble. “We’ve always had competent rivals. We’ve always suited up and fought.”

He noted that Apple sold 85 million iPhones and 42 million iPads in the last fiscal quarter and that devices powered by the company’s iOS software account for about 59% of mobile Internet traffic.

Cook said that Apple has quietly acquired nine companies so far this year and more take-overs could be on the horizon.

The slide in Apple share price “has been frustrating,” according to Cook. Shares in Apple, which topped $700 in September, were at $440 in afterhours trading on Tuesday.

Cook contended that Apple has “several more game-changers” in it but declined to give details. He said the company was still committed to its Apple TV set-top boxes for streaming online content to big screens.

Apple has sold 13 million Apple TV devices, about half of those in the past year, according to Cook.

He said he saw it as “an opportunity” to be questioned this week by US lawmakers probing whether Apple used gimmicks to avoid taxes.

“We pay more taxes than anybody,” Cook said, maintaining that the US corporate tax code should be ‘gutted’ and simplified.

He defended Apple’s frequent use of patent lawsuits against smartphone and tablet rivals, saying it was a matter of “values.”

Cook also said that Apple rejected a settlement in an e-book price-fixing case heading to US federal court because it called for the California company to sign an admission of wrongdoing in the matter.

“We didn’t do anything wrong there,” Cook said. “We’re going to fight.”