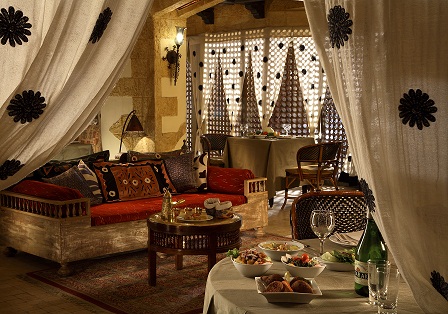 When we arrived at the Baalbek restaurant, my companion and I were welcomed by the maitre d’ who showed us to our table and took our drink orders. My companion and I both ordered mango juice, which was fresh and resembled what my mother makes at home.

The atmosphere of the restaurant was pleasant, with low lighting and welcoming and attentive servers. There were two other occupied tables when we arrived at 9pm, but by the time we left there were only two tables free in the restaurant. The maitre d’ told us that a live music segment would start after 11pm.

The menu featured a long list of mezzes – twenty-two different types of both hot and cold appetisers. We were quite overwhelmed by this, but our waiter Sameh came to our aid and offered suggestions. Finally, we decided on taboulah, hummus, labneh and fatoush as cold starters, and for the hot mezzes we ordered kebbeh, roqaqat, Lebanese sausage and spinach pies. For our main dish we decided to go hardcore Lebanese: kebbeh shish barak and chicken fatta.

In true Lebanese fashion, the cold mezzes arrived first. The taboulah was as close to perfection as taboulah can be. The ingredients were garden-fresh; the tomato, parsley, onion, cucumber, and mint were very finely chopped without being watery, and the dish itself was perfectly dressed in lemon, salt, and olive oil. The labneh blew us both away! Labneh is strained yoghurt; it has the consistency of cheese but maintains the wonderful sour taste of yoghurt. Baalbak served the labneh with minced garlic, mint, and sweet basil which gave it a flavour that was truly out of this world. The hummus, however, was a bit disappointing; it had a little too much tahina and not enough chickpeas, garlic and lemon for my taste.

The hot kebbeh and spinach pies tasted fine but the roqaqat were another story! Made of thin filo pastry and stuffed with feta cheese and mint, they melted in my mouth with the first bite. My favourite dish, however, was the Lebanese sausage in a lemon sauce. The Lebanese are known to use lemon salt in all their savory dishes, and this dish was no exception. The sausage was first fried in olive oil and then placed in a sauce of pomegranate molasses, lemon salt, and of course lemon juice. I had once read somewhere that the Lebanese view mezzes not as food, but as a way of life, and after trying this sausage, I really understood what that meant.

And then the shish barak arrived. I must say that I was a little disappointed in this dish. Kebbeh shish barak is lamb dumplings and kebbeh in a yoghurt sauce. In this case, the kebbeh was cooked well, but the dumplings were fried and placed in the yoghurt sauce, which could have been a bit more acidic and made the dish quite heavy.

The chicken fatta, a layered dish of crisped bread, cubed and boiled chicken, rice, and a yoghurt sauce with garlic and pine nuts, was very good. The bread and rice were not soggy or sticky; the rice was perfectly cooked, as was the chicken, and the dish was light and delightful.

After enjoying the variety of dishes, Sameh had to convince us to try some desert. The restaurant offers oriental deserts and pastries like muhalabia, rice pudding, and balah al-sham. We opted for the konafaOsmanlia with nuts, and it was fantastic! The slices were drizzled with a light sugar syrup which kept the sweetness pleasantly mild, the almonds and pistachios were roasted to a tee, and the konafa itself was not raw or over-baked. To end the meal we had the traditional mint tea, which felt both cleansing and relaxing at the same time.

All in all, we spent a very pleasant evening sampling a variety of dishes from Baalbak’s menu, which turned out to be well worth the trip to Nasr City.