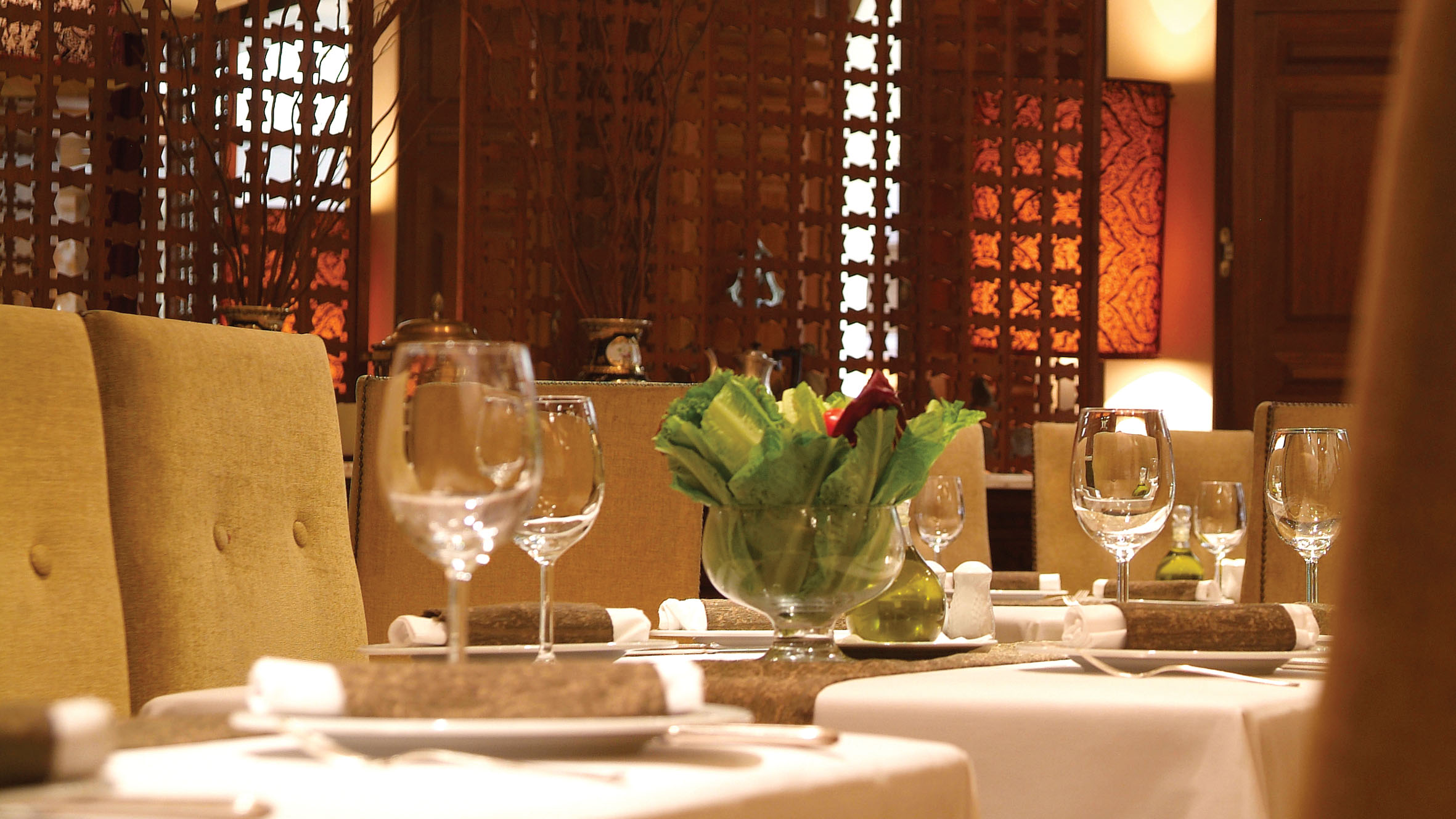 If you are looking for a getaway from the hustle and bustle of Cairo, Lebanese restaurant Sabaya, located in the heart of Cairo inside the Semiramis Hotel, is certainly worth trying.

Sabaya has a very relaxing vibe that you feel as soon as you walk in. The dimly lit restaurant relies on very few colours for decoration; its walls are divided by white arches, and simply adorned with curtains and several gold-framed, black-and-white pencil sketches.

The waiters showed us to our table, covered in white tablecloth and decorated with a single candle, and were quick to bring us damp warm towels to clean our hands.

Before we ordered we were served salad of chopped carrots and lettuce, so elegantly presented that it nearly made the salad look too good to eat.

Sabaya’s menu offers all the staples of Lebanese cuisine with an extensive variety of cold and hot mezzes. The cold mezzes include Lebanese salads such as fattouch, waraq ‘enab, taboulah and hummus with tahina and the hot mezzes range from sambousak (stuffed with cheese or minced meat) to kebbeh nayye, kebbeh shawerma, cheese manaqish, makanek and chicken liver.

The waiters were proud to serve us the apple taboulah, which they described as an “invention” of the place. The peeled and finely chopped apples were fused with the parsley and herbs, creating a sweet and sour mixture. For the less adventurous, a traditional tasty taboulah, with tomatoes instead of apples, was also served.

The fattoush tasted great, with the sour juices fusing nicely with crunchy bread and relatively larger pieces of tomatoes, cucumbers and herbs.

We also tried some delicious waraq ‘enab, stuffed vine leaves served cold and soaked in lemon juice, and the hummus with tahina, which was pleasing but did not taste any different than other restaurants serve.

Digging into the hot mezzes, we tried the Sabaya kebbeh shawerma that was presented in the shape of four closed, brownish flowers. Though tasty and crispy, we could not quite trace the taste of shawerma in the dish. The makanek was one of the highlights of the meal. Cooked with slightly sour pomegranate molasses, the oriental beef sausages had the perfect taste and texture.

The menu for the main dishes lacked the variety of the mezzes, but then again, Lebanese cuisine is all about the mezzes.

Sabaya offers a number of dishes “from the grill”. We decided to try the Sabaya mixed grill to sample the variety of meats the restaurant offers and were pleasantly surprised by the generous portions.

The rice was served in a very small portion and was prepared with minced meat and pine nuts, but turned out rather tasteless. The different cuts of meat were very tasty, especially the grilled kebabs. Overall they could have done with a shorter time on the grill, though; most items were a bit dry, especially the ribs.

We also sampled the Sabaya mixed seafood, which was served with a side of grilled vegetables and white rice served with pine nuts. The juicy, well-seasoned salmon stood out with the mouth-watering, well seasoned jumbo shrimps a close second. The grilled eggplants, red peppers and zucchini served on the side complemented the seafood well. Overall, the seafood was very well seasoned and we preferred it over the mixed grill.

Sabaya offers a good number of oriental dishes for the sweet-tooth. Apart from the basics, the menu included more international desserts, such as ice cream. We tried the Lebanese sweets plate, which is a mixture of oriental delicacies such as basbousa, shakallama, konafa, baklava and eyoun el-sett. The mini delicacies were quite soft and the sugar level was perfectly balanced. The eish el-saraya was not orange and drowned in molasses as it is usually served in Egypt; though small in portion, the dessert’s taste was simply delicious. Again, it had just the right amount of sugar, and the whipped cream that filled the layers succeeded in toning down a generally sweet dessert.

We were also served a large plate of fruits that included watermelon, apple, red and green grapes and harankash, (golden berries). We finished the meal with a bowl of muhalabia; a very sweet dessert made of thickened milk.

We enjoyed excellent lemon mint juice, and after our meal the waiters insisted we try the classic ‘white coffee’. We were told it is custom in Lebanon to conclude a meal with this digestive drink. Solely composed of three thirds of hot water and one third of rosewater, the delicate drink did indeed sooth our stomachs and it was the perfect ending to a pleasant oriental dining experience.