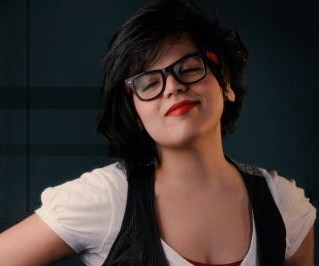 Even a quick look at the cultural scene in Egypt is enough to disprove the naysayers who claim there is little artistic talent or creativity left in the country. Incredibly talented artists, underground bands, independent singers, and composers are out there on their own, making their way with little or no help, while beaming with potential. Sarah El-Gohary is one of them.

Sarah El-Gohary is a singer, composer, and songwriter that started her journey a while back, performing at both school and college talent shows. Growing up, she was always the family entertainer. Born and raised in Abu Dhabi, Sarah returned to Egypt at the age of 17 to study and pursue her dream of being a professional singer. Also working as a voiceover artist and a dubbing actor, El-Ghoary is featured in a variety of radio jingles and advertisements, and lent her voice to Cinderella in the Arabic animated film True Sisters. She has also collaborated with singers like Samo Zein and Moroccan artist Hoda Saad.

Her songs point to a strong individual who will not tolerate other people’s nonsense. “I write songs that express who I am, and the experiences I’ve been through. One of my songs, Ballona (a balloon) was written when a producer refused to hear my voice because he thought I was overweight. I could not believe it. Therefore, I decided to respond with a song. I am talented, and no one has the right to judge me because of how I look,” El-Gohary explained.

Some of her songs are of a more personal nature, like Sot Za’ee’ (the sound of screaming), which the singer says she “wrote to tell the world about the pain I have gone through when my parents got divorced. Though it is personal, it sheds light on a crucial issue of divorce and domestic violence, of which the children are [often] victims.”

She is inspired by those who strive to change their surroundings. “I admire the late Sheikh Zayed for his limitless giving, Adele for believing in her talent and not caring about her weight, Michael Jackson for his messages that call for unity, Katy Perry for being colourful and positive like me, and Mounir for his genuine art and holding on to his roots,” she says.

Sarah wishes to one day perform with the likes of Mahmoud El Esseily, Hameed El Sha’ery, Bruno Mars, and Pink.

About her coming projects, Sarah said, “I have a new song called Endless Signs, which is already out and featured on Nile FM. I am also preparing to release another single, ‘elbet CDhat (A box of CDs), which tells the story of a broken up romantic relationship.”

Sarah is performing her next concert at Cairo Jazz Club on 4 June. More information about her and her upcoming concerts can be found on her Facebook page.