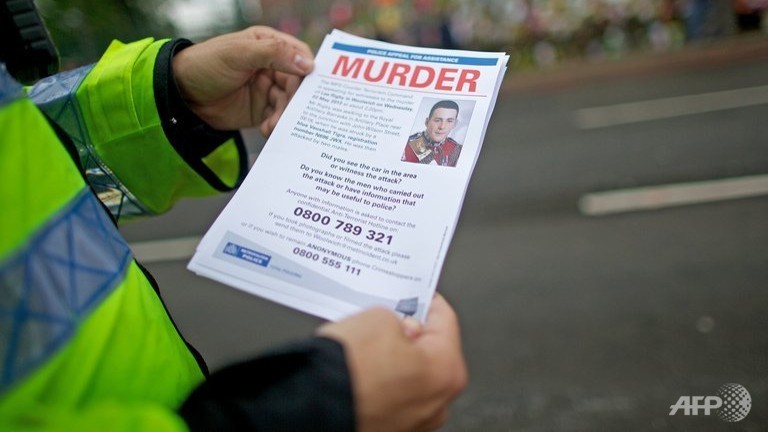 By James Pheby (AFP) – British police charged with murder one of the two chief suspects in last week’s brutal suspected Islamist attack against a British soldier on a London street.

Metropolitan Police confirmed they had charged Michael Adebowale, 22, Wednesday with the murder of 25-year-old Lee Rigby, who died following the May 22 attack in Woolwich, south east London.

“Detectives from the Metropolitan Police Service’s Counter Terrorism Command have…charged a man with the murder of Drummer Lee Rigby in Woolwich on Wednesday 22 May,” said the police statement.

“Michael Adebowale, 22, of Greenwich, was charged with the murder of Lee Rigby contrary to common law.

The suspect was also charged with possession of a firearm.

He was remanded in custody and will appear at Westminster Magistrate’s Court on Thursday morning.

Sue Hemming, head of the public prosecutor’s special crime and counter-terrorism division said she advised police there was now “sufficient evidence” to prosecute Adebowale and it was “in the public interest to do so.

“This man is now charged with serious criminal offences and he has the right to a fair trial,” she added.

The other suspect, 28-year-old Michael Adebolajo, remains under guard at a London hospital, police added.

Both men required hospital treatment after being shot and injured by police at the murder scene last week.

Rigby was hacked to death in broad daylight before Adebolajo delivered an Islamist tirade to passers-by.

London’s Metropolitan Police added, in a statement, that Rigby had been hit by a car before the fatal attack.

A formal hearing into Rigby’s death will open at Southwark Coroner’s Court in London on Friday, police added.

Adebowale was discharged from hospital on Tuesday before being held at a south London police station ahead of questioning.

Adebolajo was filmed holding a bloody knife and a meat cleaver shortly after the attack, telling a passer-by he killed Rigby because British soldiers were killing Muslims every day.

Eight other people have been arrested over the case, including two women released without charge.

Suspect Hayden Allen, 21, who was held on Saturday on suspicion of conspiracy to commit murder, denied being any part of the “atrocity” in a statement released by his lawyers.

Both Adebowale and Adebolajo are converts to Islam who grew up in Christian Nigerian families.

Police on Wednesday appealed for witnesses to come forward, particularly those with information about the blue Vauxhall Tigra car that struck Rigby.

“A fast-paced and complex investigation is now under way led by detectives from the Met’s Counter Terrorism Command,” senior police officer Simon Letchford said at the murder scene, near Rigby’s barracks in Woolwich, southeast London.

“We need to hear from anyone who may have seen Lee being attacked or who may have any other information that may help.”

Rigby had a two-year-old son with his wife but the couple were separated, and he was engaged to another woman, Aimee West.

West, thought to be a member of the Royal Military Police serving in Afghanistan, issued a statement on Wednesday saying she was “devastated by the loss of Lee, who was a loving fiance”.

“I am extremely proud of him and I am moved by all the flowers and tributes, and that he has been remembered by the nation as the great man that he was,” she said.