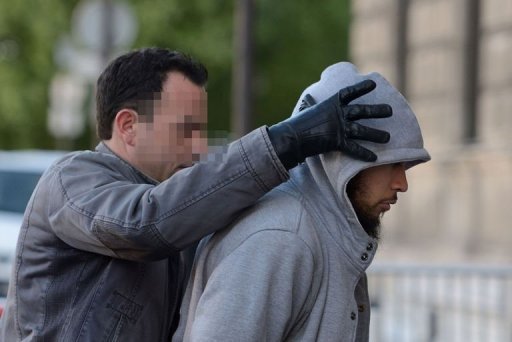 By Etienne Fontaine (AFP) – French police arrested a young man Wednesday over the weekend stabbing of a soldier in Paris, with prosecutors saying he admitted to the attack and was probably motivated by “religious ideology”.

Paris prosecutor Xavier Molins said the man, named as Alexandre D. and who turns 22 on Thursday, was a convert to Islam who had bought two knives and said a Muslim prayer shortly before stabbing Private First Class Cedric Cordiez in the neck on Saturday.

Molins said the man, who was known to police after undergoing an identity check in 2009 for praying on the street, had “admitted to the act” during his arrest in the Yvelines region just west of Paris.

The stabbing echoed the grisly killing of a British soldier in London last week and authorities are seeking to determine if the Paris incident was a copycat.

“The nature of the acts, the fact they were committed three days after London and the prayer said just before the act took place lead us to believe that he acted in the name of his religious ideology and wanted to attack a representative of the state,” Molins said.

The prosecutor said the suspect had “a fairly clear intent to kill” during the attack, which took place in a busy underground shopping and transport hub while Cordiez was on patrol with two colleagues.

Cordiez, 23, was wounded but released from hospital on Monday and has returned to his unit.

A police source said the attacker had been identified by intelligence services in February as a “radical”.

Le Monde newspaper quoted an official document saying the man had raised suspicion as far back as 2009 and had attracted the attention of police in the western suburb of Guyancourt last year for his “behaviour”.

Molins said the suspect had shown an “impressive determination” to carry out the attack, stabbing the soldier “several times” with a fold-out knife.

He said video footage from the shopping centre showed the suspect buying two knives an hour prior to the attack and praying eight minutes before the stabbing.

Molins added the suspect, who did not have a criminal record, was arrested at the home of a friend who was not connected with the crime and did not know that the suspect was being sought.

A police source said the suspect did not resist during his arrest at around 6:00 am (0400 GMT) and told officers he had spent three days hiding in an abandoned rail car in the area.

A source close to the investigation earlier said the suspect had been a follower of “traditionalist even radical Islam for the last three or four years.”

Police identified him thanks to the video footage and traces of his DNA found on items left at the scene in a plastic bag, including a knife and a bottle.

In a statement Interior Minister Manuel Valls said investigators were seeking to know more about the suspect’s “motivation, background and family environment”.

Acquaintances in the La Verriere area where the suspect lived described him as a troubled loner.

“People in the neighbourhood found him a bit weird because sometimes we’d see him at the mosque, but on the other hand he drank alcohol. He was lost,” local resident Kader Dahamni said.

“He was often alone, walked alone, came home late at night,” Dahamni said. “He seemed like a person who has lost his way, lives from day to day, there was always drink in his backpack, he’d eat on the hoof…. He seemed a bit like a tramp.”

Valls meanwhile warned of a growing number of young radicals in France similar to Mohamed Merah, the Islamist gunman who killed seven people, including three soldiers, in and around the southwestern city of Toulouse last year.

Valls said on French television that there are “several dozen, perhaps several hundred, potential Merahs in our country,” adding that young French Muslims were being “radicalised” on the Internet and by extremist imams.

The key suspect in the London attack, Michael Adebolajo, was captured on video carrying bloodied knives and a meat cleaver after the attack, saying he had murdered off-duty soldier Lee Rigby because British troops were killing Muslims.