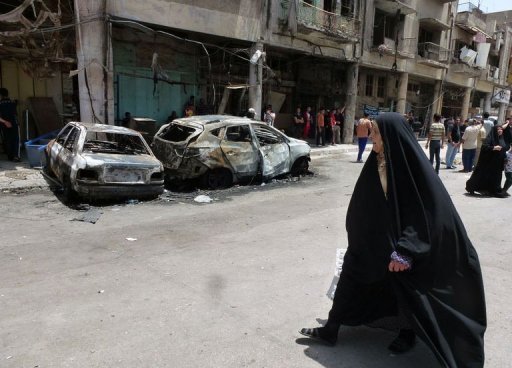 By Mohamad Ali Harissi (AFP) – Attacks including a bombing against a bridal party killed 28 people in Iraq on Wednesday, officials said, the latest in a wave of violence that the government has failed to rein in.

Violence has killed more than 570 people in Iraq so far in May and over 1,000 in less than two months, according to AFP figures based on security and medical sources.

The government’s public response has so far been limited to speeches, a shakeup of senior security officers and announcing a series of vague new measures relating to security.

In the deadliest attack, a car bomb exploded in south Baghdad as people cheered a bride ahead of her marriage, killing 16 people and wounding 42, officials said.

And two more bombs detonated in a commercial area of west Baghdad, killing at lest nine people and wounding at least 15.

In Abu Ghraib, west of Baghdad, gunmen shot dead an army brigadier general at his home, while two roadside bombs exploded near a football pitch in Baquba, north of the capital, killing one person and wounding nine.

Gunmen also killed an anti-Qaeda militia leader southwest of the northern city of Kirkuk, and a roadside bomb north of the city of Tikrit targeted the governor of Salaheddin province’s convoy, wounding four of his guards.

Iraq has seen a heightened level of violence since the beginning of the year, coinciding with rising discontent among the Sunni Arab minority that erupted into protests in late December.

Members of the minority, which ruled the country from its establishment after World War I until Saddam Hussein’s overthrow by US-led forces in 2003, accuse the Shi’a-led government of marginalising and targeting their community.

Analysts say government policies that have disenfranchised Sunnis have given militant groups in Iraq both fuel and room to manoeuvre among the disillusioned community.

The government has made some concessions aimed at placating protesters and Sunnis in general, such as freeing prisoners and raising the salaries of Sunni anti-Qaeda fighters, but underlying issues have yet to be addressed.

United Nations envoy Martin Kobler called on Tuesday for the country’s leaders to meet to resolve long-running political crises that have paralysed the government and been blamed for its inability to halt the bloodshed.

But there have been repeated previous efforts to bring the Iraq’s feuding leaders together to work out their difference since late 2011, all of which have failed.

Although the violence in Iraq has fallen from its peak at the height of the sectarian conflict in 2006 and 2007, when death tolls could run to well over 1,000 people per month, the body count has begun to rise again.

On Tuesday, the cabinet announced a series of measures related to security.

These included “pursuing all kinds of militias,” calling for a meeting of political powers to discuss developments, providing unspecified support to security agencies, and warning the media against inciting sectarian strife.

It was unclear what if any immediate impact they could have on the worsening security situation.