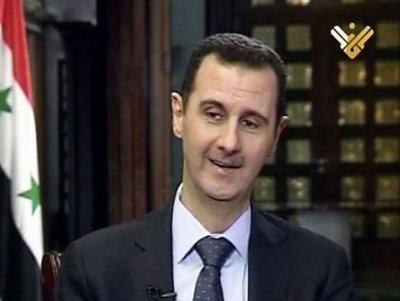 AFP – Syrian President Bashar al-Assad has threatened Israel with renewed fighting in the Golan Heights and said Russia was committed to supplying him with advanced missiles, in an interview broadcast Thursday.

Washington warned that any such weapon deliveries from Moscow would only prolong the conflict between government forces and Assad’s foes in Syria, where activists say more than 94,000 people have been killed since March 2011.

“There is clear popular pressure to open a new front of resistance in the Golan,” Assad told Al-Manar television, run by his close ally, the Lebanon-based Shi’a movement Hezbollah which has been fighting alongside his forces.

“There are several factors, including repeated Israeli aggression,” he said, referring to reported Israeli air strikes on Syria.

“We have informed all the parties who have contacted us that we will respond to any Israeli aggression next time.”

There was no immediate comment on Assad’s remarks from Israel, which annexed the Golan Heights in 1981, years after seizing it, in a move never recognised by the international community.

Assad, whose forces are battling alongside Hezbollah fighters to recapture the key town of Qusayr near the border with Lebanon, said he was “very confident” of victory.

“There is a world war being waged against Syria and the policy of (anti-Israeli) resistance… (but) we are very confident of victory,” he said.

Lebanese Prime Minister Tamman Salam said his country should stay out of the Syrian conflict, in an interview published in Friday’s edition of the French daily Le Figaro.

“We must at all price preserve national unity,” he added.

“And obviously, Hezbollah’s military involvement is not helpling matters.”

Assad appeared to imply in the interview that Russia had already delivered some of the promised ground-to-air S-300 missile systems.

“All the agreements with Russia will be honoured and some already have been recently,” he said.

Moscow said earlier this week that it would honour the contract to deliver S-300s to Syria.

But Russia’s Vedomosti and Kommersant newspapers said Moscow may not deliver the missile systems to Damascus this year and rejected claims the weapons had already arrived in the country.

US National Security Council spokeswoman Caitlin Hayden said: “Providing additional weapons to Assad — including air defence systems — will only prolong the violence in Syria and incite regional destabilisation,” she added.

Israeli Energy and Water Minister Silvan Shalom indicated that the Jewish state would only act to prevent the missiles being used against it.

A monitoring group meanwhile reported that Syrian troops had killed three Westerners, including a US woman and a British man, both Muslims, near the border with Turkey on Wednesday.

“They were shot dead during an ambush in the Idlib region and the army found them with maps of military positions,” said Rami Abdel Rahman, director of the Syrian Observatory for Human Rights.

They had apparently been taking photos of military positions on the road between Harim, near the border with Turkey, and the town of Idlib further south, he added.

The United Nations said a preparatory meeting for a proposed international conference on the Syrian conflict would take place in Geneva next Wednesday, attended by Russian, US and UN officials.

Earlier, Syria’s opposition National Coalition, meeting in Istanbul, said it would not take part in the peace initiative dubbed Geneva 2 “so long as the militias of Iran and Hezbollah keep up their invasion”.

They wrapped up eight days of often troubled meetings in Istanbul early Friday announcing they had expanded to include 43 new members.

The Coalition has appealed for the rescue of a thousand citizens wounded in Qusayr, which Assad’s forces have been trying to seize back in an all-out offensive since May 19.

It has also insisted that any negotiations with the regime must lead to Assad’s resignation, a position Russian Foreign Minister Sergei Lavrov criticised on Thursday as unrealistic.

“We are under the impression that the National Coalition and its regional sponsors are doing everything so as not to allow the start of the political process and achieve military intervention in Syria through any means possible,” said Lavrov.

“These demands are impossible to fulfil,” he added. “The only thing that unites them is a demand of Bashar al-Assad’s immediate departure.”