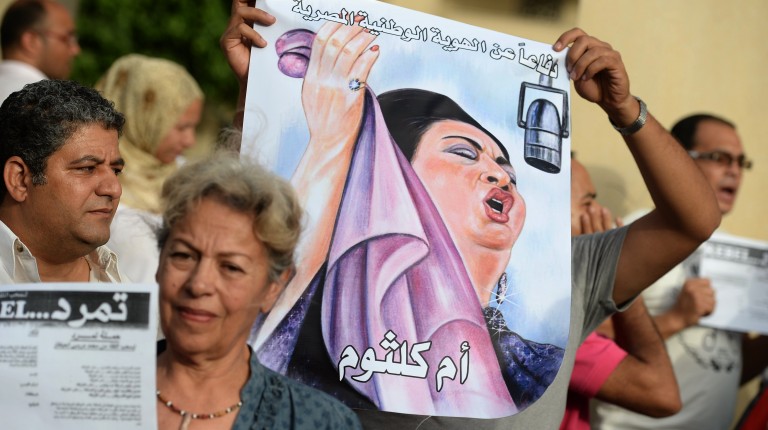 Protests by artists against Minister of Culture Alaa Abdel Aziz at the Cairo Opera House have entered their fourth day, following the minister’s removal of Inas Abdel Dayem, former head of the opera house.

The opera house announced on Thursday that Abdel Aziz had appointed Badr El-Zaqazeeqi as its new head.

Maha Effat, spokesperson of the Revolution Artists Coalition, said that El-Zaqazeeqi has not yet taken over Abdel Dayem’s office, but is expected to do so on Sunday.

Artists started protesting on Thursday, following the removal of both Abdel Dayem and Salah El Meligy, head of the applied arts department at the ministry.

This protest was also accompanied by a strike at the opera house, which started on Wednesday and lasted till Saturday, according to their statement.

In a recent interview with Al Jazeera, Abdel Aziz asserted that “there is no such thing” as spreading Brotherhood ideologies in the cultural domain, on the grounds that Egypt is predominantly a Muslim country and that Egyptian society is mostly religious.

Abdel Aziz also said that no one political or ideological current should take charge of the cultural scene.

He added, “I know that I am only here for a short period of time, which is why I intend to bring everything back into order according to my personal agenda and vision, which I discuss with Egyptian artists and intellectuals.”

Abdel Aziz said that there is no time to waste by keeping people with high qualifications and talent out of the spotlight.

“It’s time to use these talents and further develop their ideas,” Abdel Aziz said, adding that his guidelines for appointing anyone are qualifications and integrity.

On a related note, the Egyptian Creativity Front posted a statement by the Actors’ Syndicate denouncing the proposal of a member of the Salafi Al-Nour Party to ban ballet, saying that they will file a lawsuit against this member for making such a proposal.