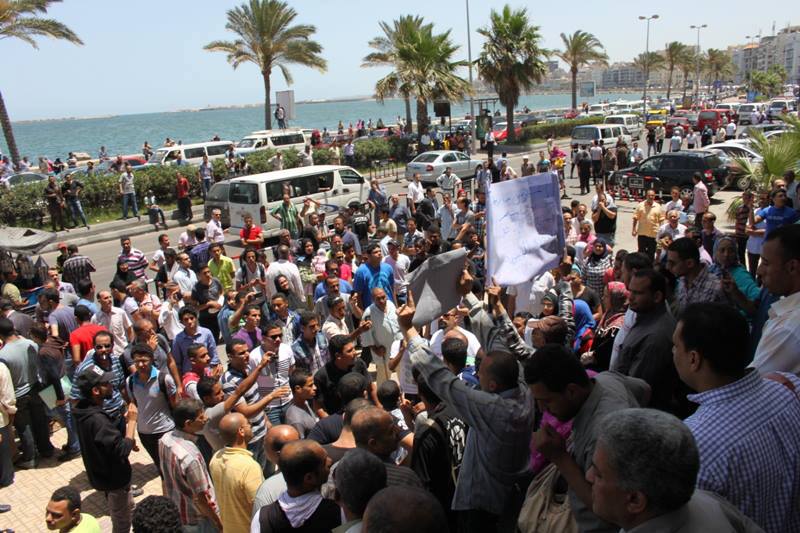 An Alexandria court ordered on Saturday the release of two police officers accused of murdering Khaled Said. The decision came during the first session of their retrial, which the court decided to postpone until 6 July.

Supporters of Said and his family had gathered outside court to show solidarity. Al-Khatib said that after the hearing, protesters blocked the road ahead of Central Security Forces “but there were no clashes”.

Said’s murder is seen as one of the sparks of the 25 January Revolution. The 28-year-old Alexandrian was allegedly dragged out of an internet cafe and beaten to death by two policemen in Sidi Gaber on 6 June 2010. Witnesses claim the officers smashed his head against marble steps which led to his death.

The police then claimed he was a drug dealer who swallowed a packet of drugs and choked to death. An independent forensic report showed the packet was forced into his throat after his death.

In October 2011 the two policemen were charged with wrongful arrest and torture and sentenced to seven years in prison.

Last month, the Court of Cassation accepted appeals presented by both the prosecution and the lawyers of the policemen and decided that a retrial would start on 1 June.

Political groups are planning to hold memorial services for Said. The Masr Al-Hurreyya party called for two silent vigils for Said, one by the Qasr Al-Nil Bridge in Cairo and the other near the corniche in Alexandria.  The party said the protests will be “in the memory of Said and to condemn continued human rights violations”.

Al-Khatib said the movement is considering holding silent vigils by the sea, “just like before the revolution when we would protest in demand of Said’s rights”.