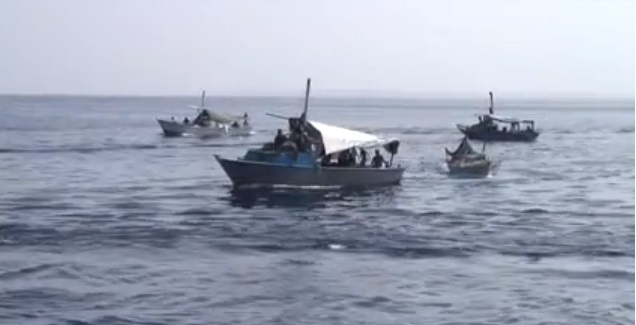 Illegal fishing in the Red Sea is on the rise according to a local environmental NGO.

Daily News Egypt spoke to Rami Abdelmoneim from the Hurghada Environmental Protection and Conservation Association (HEPCA) about the issue.

“These sorts of incidents have started happening more frequently in the last couple of months,” said Abdelmoneim. “We are very concerned about the issue. It is not only in the national parks but also on the coral reefs, which is also illegal.”

Fishermen in Egypt are struggling to make ends meet, with many operating in restricted or protected waters. There has been a rise in the number of reports of fishermen straying outside of Egyptian waters in search of a catch. Several incidents have occurred where fishermen have been detained for fishing in territorial waters belonging to Saudi Arabia, Libya, Yemen and Tunisia.

“Their industry might have been marginalised and they need to maintain their livelihood and feed their families,” Abdelmoneim said. “The problem also stems from the economic situation in the country. The first victim of a downward economic spiral is natural resources.”

Following the 25 January Revolution in 2011, Egypt has faced increasing insecurity, something that Abdelmoneim believes has contributed to the rise of illegal fishing in protected areas. “Post-revolution, there is a feeling that security and law is not being enforced. People are not afraid of the ramifications.”

The environmental activist believes that part of the issue is ignorance. “Many of these fishermen may not be aware that sharks and turtles are protected species, or know that their existence contributes to tourism revenues.”

He said there are other issues threatening the coastline, including irresponsible divers, an increase in oil concessions and an “unsustainable tourism industry”. Abdelmoneim stressed that the accumulation of these incidents will have a detrimental impact upon the industry, highlighting scuba diving as an industry that would be hit hardest.

HEPCA is working to “lighten the impact” of the issue, Abdelmoneim said. The group reports all violations to the relevant authorities. However, the group is based in Hurghada and unable to cover the whole of the Red Sea. “There are very few environmental NGOs in Egypt doing this kind of work,” he said, adding that HEPCA works to raise awareness of the issue.

Abdelmoneim said on the governmental side, there should be an increased emphasis on enforcement and allocation of resources needed to cover the entire area. He also pointed out the need for changes to the current model of the tourism industry in Egypt, repeatedly describing it as “unsustainable”.

In this regard he said that Prime Minister Hesham Qandil and Minister of Tourism Hisham Zaazou have both been supportive of efforts to deal with the issue. In May, Red Sea Governor Mahamad Kamal joined Qandil and Zaazou for a boat trip along the Hurghada coast to observe work being done to preserve the Red Sea environment.