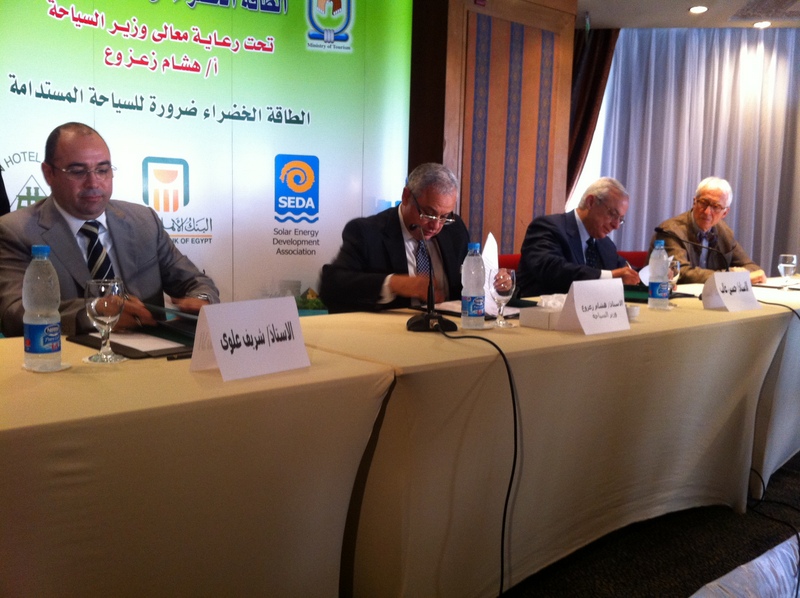 Minister of Tourism Hisham Zaazou signed on 30 May a protocol with the National Bank of Egypt, the Egyptian Hotels Association, and the Solar Energy Development Association to provide Red Sea hotels with solar energy in order to reduce the consumption of non-renewable energy amid fuel shortages.

Nashwa Tala’at, manager of the Green Tourism Department in the ministry, said in a press conference held on Monday that “effective one year after signing the protocol, 100,000 hotel rooms will be provided with solar energy for 5 years”.

Zaazou stated that the idea of green tourism had been in the works for three years, with three primary objectives in mind. These include: qualifying Egyptian hotels for the Green Star, a rank signifying that the hotel is eco-friendly; solar water heating, by which hotels would rely on renewable solar energy over normal power sources to heat their water; and intelligent lighting, by which sensors would detect the emptiness of a hotel room and automatically turn off any lamps.

Zaazou added that this would lead to a 30% reduction in hotels’ electricity bills, which currently exceed EGP 1bn, and suggested that the project should be expanded to include tourism facilities along the Nile in order to fight pollution to the river.

The minister also stressed that the ministry will at some point require other hotels to change to renewable energy and that “whoever starts now will benefit greatly, as prices rise rapidly”, adding that “other hotels should sign the protocol as soon as possible”.

Zaazou ended his speech by saying that there will be another press conference in three to six months to assess the project’s progress, inviting the Minister of Environment to attend.

In a Sunday interview, meanwhile, Mohamed El-Sobky, head of the Energy Research at the Cairo University, doubted the effectiveness of this initiative, citing the vagueness of legislation pertaining to renewable energy sector in Egypt.