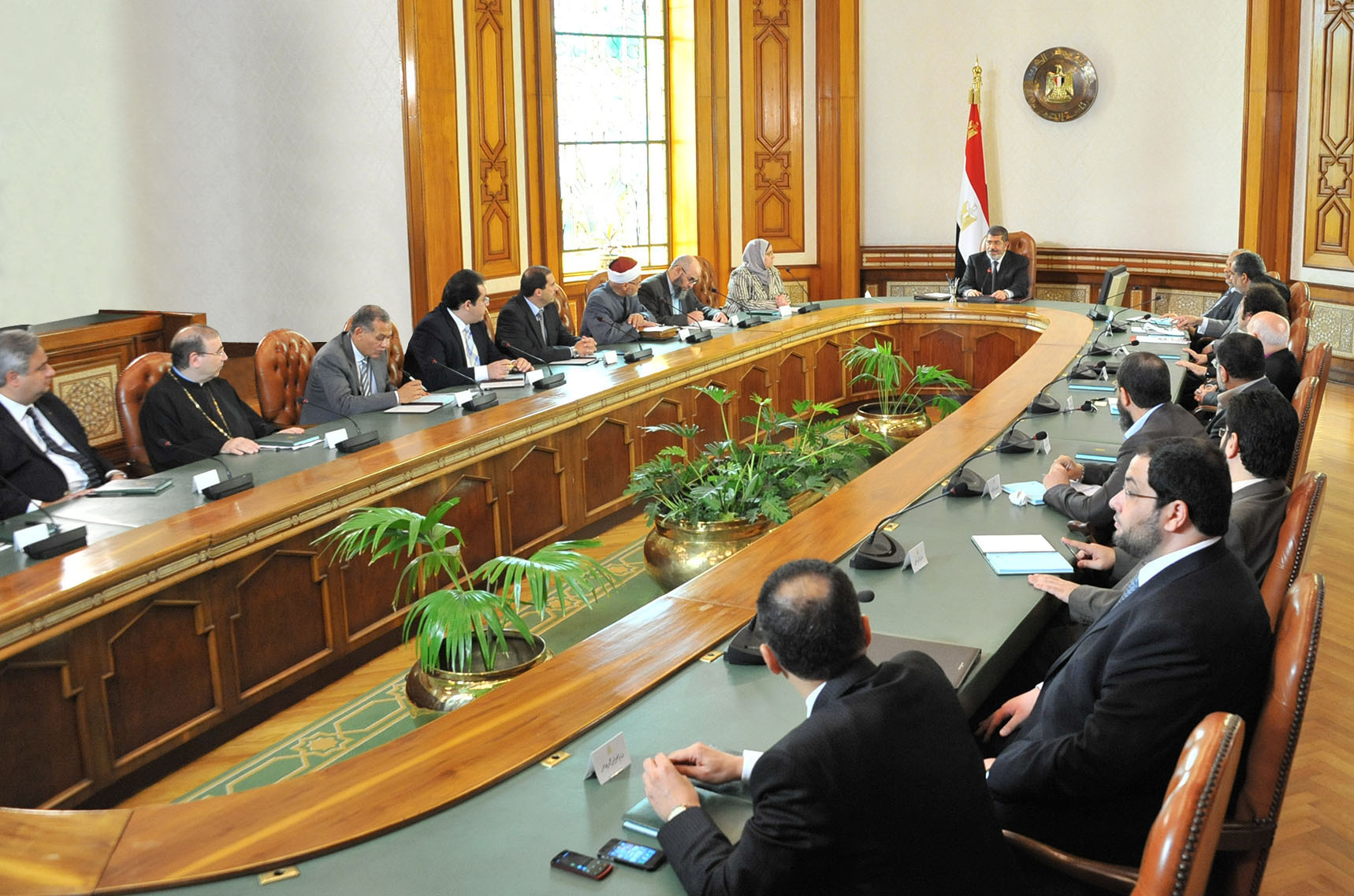 President Mohamed Morsi ordered the ministers of foreign affairs and irrigation and water resources to continue negotiations with Ethiopia regarding the construction of the Grand Ethiopian Renaissance Dam.

The decision came after Morsi met with the cabinet shortly after meeting political figures on Monday. Both meetings recommended more studies and demanding more information about the dam and its possible effects on Egypt and Sudan.

The president also gave orders to form a national committee that includes official, popular and executive authorities to deal with the crisis and inform the public about the results.

“Egypt will not give up its right to Nile water and all alternatives are being considered,” a statement released by the State Information Service read.

The Foreign Affairs and National Security Committee of the Shura Council held a press conference on Tuesday to discuss the dam; Minister of Irrigation and Water Resources Mohamed Bahaa Al-Din and Minister of Electricity and Energy Ahmed Imam attended the conference.

“Egypt didn’t approve the construction of the dam at any point,” Bahaa Al-Din said. “We hired an American expert to do a study on the dam and he warned us of the implications.”

Morsi’s meeting with political figures on Monday stirred controversy as some participants seemed unaware the meeting was aired live on national television.

“I’m surprised the presidential meeting regarding the Ethiopian dam was aired live without informing the participants, in spite of the sensitivity of the topic,” said Ghad Al-Thawra Party leader Ayman Nour on Monday.

Pakinam El-Sharkawy, the president’s adviser for political affairs, released a statement on Monday apologising to the participants for not informing them the meeting was televised.

“The meeting was meant to be recorded as usual, but due to the importance of the water security file it was decided shortly before the meeting that it would be aired live. I forgot to mention it to the attendees,” Al-Sharkawy stated.

The statements were widely criticised by Egyptian and Ethiopian social media activists.

“Sincere apologies to the people and governments of Ethiopia and Sudan for the irresponsible utterances at the president’s ‘national dialogue’,” said National Salvation Front (NSF) and Al-Dostour Party leader Mohamed ElBaradei via Twitter on Tuesday.

President Morsi had called for the meeting with political leaders to discuss the findings of a report presented by an international panel of experts on the possible effects of the Renaissance Dam on both Egypt and Sudan.

Some leaders had turned down the invitation such as Mohamed Abul Ghar, chairman of the Egyptian Democratic and Social Party (ESDP), and former presidential candidate and Al-Tayar Al-Sha’aby leader Hamdeen Sabahy.

She added that the invitation came late and there was no time to prepare for a discussion of such an important matter. “However, we support any serious initiative aiming to solve the crisis.”