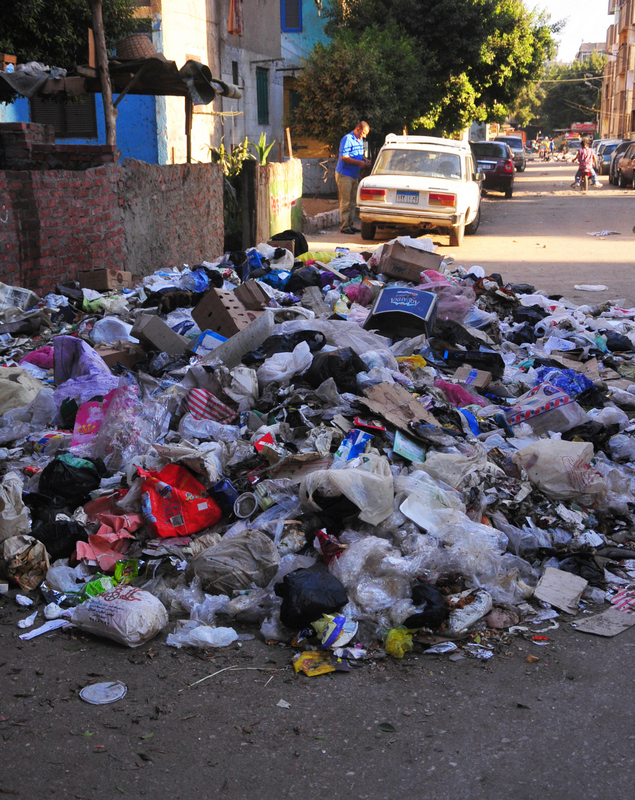 Since 5 June 1973, the world has been commemorating efforts exerted to raise awareness about environmental issues. The day is supported and its activities are organised globally by the United Nations Environment Programme. Each year a theme is chosen to raise awareness about a particular environmental issue and for the year 2013, the theme is an “anti-food waste and food loss campaign that encourages reducing your ‘foodprint’”. This year the celebration event will be hosted by Mongolia with the slogan “Think, Eat, and Save”.

According to the World Health Organisation (WHO), the latest samples taken from sewage water in two areas of Greater Cairo in December 2012 were positive for poliomyelitis, a disease Egypt fought in the past previously managed to stop spreading in 2004.

The WHO also reported that Egypt’s annual mean of the concentration of particulate matter is 138 PM10 ug/m3 which ranks Egypt as the country with the sixth (out of 91 sampled countries) most harmful air which may result in respiratory diseases.

“Unfortunately, we suffer from much pollution in three of the main environmental components; air, water and food,” says Salah El-Haggar, a professor of energy and sustainable development and the chairman of the Mechanical Engineering Department at the American University in Cairo.

“Pollution in the air coming from car exhausts and rubbish and agricultural waste burning is so severe. For the water, we face major problems especially in rural areas where sewage treatment facilities are not established and therefore the people throw their sewage in the water canals. As a result, the drinking water and the soil are polluted. Our usage of chemical fertilisers and pesticides and using sewage water as a source for neutrons and land reclamation contaminate crops with harmful chemicals and microbes coming from sewage water.”

El Haggar believes that the impact of pollution in these three elements is gravely affecting public health. The proof is how the Egyptian society is plagued with Hepatitis A, B and C, kidney failure and cancer. The persistency of pollution endangers and threatens Egypt’s public health by bringing back diseases the country previously thought were eradicated.

Hesham Zayed is the president of the Egyptian Green Party. Established since 1990, the party has been working on and lobbying for several environmental issues such as clearing landmines near Egypt’s North Coast. The party is a political movement charged by a holistic environmental vision for Egypt which they believe the Egyptian government has lacked for years.

“Energy and water should be the priority of this government because we [the Green Party] believe that every society is dependent on energy, water and human beings. We have the human element, but the other two are completely mismanaged,” says Zayed.

The “developed” world with the cooperation from “developing” countries has signed protocol, agreements and treaties under the umbrella of the United Nations in order to ensure environmental rights for the world’s citizens. Today, these rights are equated to guaranteed human rights that countries try to achieve.

“For me environmental rights entail equitable sharing of resources and in Egypt the sharing equation is always skewed in favour of investors,” says Reem Labib, an environmental justice researcher at the Egyptian Initiative for Personal Rights (EIPR). “The community where industrial projects are established are the ones who bear the grunt and the impact without many of the benefits.”

Labib cites a stark example for how projects impact communities negatively. A new nuclear plant being promoted by the current government is planned to be constructed in El Dab’ah in the west of the North Coast. The government called it a “national project” and therefore the land for the project was taken away from the original inhabiting community.

“This land has been owned by the Bedouins for 30 years, it’s the land of their ancestors. It has been stripped away from them with no proper compensation yet. That’s why the community mobilised against this injustice,” Labib says.

Labib explains that before any project takes place, there is an environmental assessment that is carried out to guarantee the community and environment are not harmed by the project.

“If the project is big, there is usually a public hearing. However, it is cosmetic. Sometimes it is announced a day before the hearing or even hours ahead which result in very low turnout,” she elaborates.

“Conducting EIAs is a commitment on the EEAA and they always have comments for the projects and sometimes they disapprove projects if its activity could be or are detrimental to the environment and the surrounding community,” he explains.

“The EEAA also regularly monitors some projects such as cement factories which produce some of the most harmful air pollutants. From my work, I have seen fines imposed on factories,” he adds.

However with the lack of environmental rights, Labib believes that the government will not be able to face the challenges at hand. There needs to be change in the way policies are shaped, she says.

“From looking at the direction Egypt is going, the country is following the same economic policies that favour profitability more than sustainability,” Labib says “This has not changed since the revolution despite many being optimistic about it. For example, there is no serious effort from the government to shift from a fossil-fuel driven economy.”

To Labib, the “problem is that we use a political discourse that perceives the environment to be separate from the rest of the system. However, the environment is directly related to public policy, politics and the economy.

In addition to the limited conversation about environmentalism in public discourse, Labib believes “transparency, accountability and participation to solve the [environmental] issues… are missing from every level within civil and public society.”

Is the environment a priority for the current the government?

“No,” says Zayed. “The government is bankrupt; they have no vision for anything. No political vision, no environmental vision, nothing really and that is why they are failing.”

According to Zayed, when the constitution was in the making, almost every political party, regardless of their different political ideologies, sat together with the current government to raise awareness about the environmental rights deserved by all Egyptians.

“They adopt environmental rights in principle and refer to them in the constitution, without referring to which governmental bodies are held accountable. This makes the constitution vague,” the Green Party leader says.

“The word ‘sustainability’ is thrown in [the constitution] in a general way with no specific context. We raised our issues with the draft to the Constituent Assembly, but the assembly did not care about content of the draft; they only cared that it was passed and approved,” Zayed explains.

The proof Zayed uses to show the government’s misdirection, lack of vision and mismanagement of environment issues is a confrontation between the government and civil society regarding the construction of the nuclear power plant in Al Dab’ah.

Like EIPR, the Green Party and other environmental specialists completely oppose the project for its lack of economic viability due to importing nuclear fuel and the difficulty of disposing nuclear waste.

“I do not know why we resort to a nuclear solution while we have the wind and the sun; both are economically less costly, renewable and clean,” Zayed says. “The government has starting selling the nuclear dream to the people as if it’s the magical solution to Egypt’s problems, while in fact it’s catastrophic for Egypt, especially since the country possesses safer alternatives.”

Zayed infers that the project is merely a political move to improve the image to raise the popularity of the regime. In response to the government’s nuclear plans, the Green Party started a campaign to raise awareness about the plant and its financial and environmental costs, and Zayed says he is confident public awareness of the project has increased as a result of the campaign.

Labib believes having two ministries such as EEAA and the Ministry of Local Governance conducting EIAs for construction and engineering projects makes the mandate of the EEAA weak and leaves room for corruption and laxity.

El Haggar, on the other hand, believes that each governmental body has a certain responsibility, but there needs to be mechanisms that ensure these responsibilities are carried out. According to the professor, the government has a few plans and solutions to the environmental issues that plague the country. The first, he says, is in law enforcement.

He believes that Egypt has drafted and passed into law more than enough environmental regulations since 1967.

“Our problem is enforcement. I would say 60-70% of environmental regulations are not enforced. I think enforcement is the first step to reform the system,” the sustainable development professor says. “There isn’t enough awareness about the importance of enforcing environmental regulations, and the impact of implementing them is not clear to the public. By enforcing the laws, we do not mean just punishing violations, but also providing incentives.”

El Haggar, who has been providing technical support for the project, is optimistic about the expected benefits of utilising organic fertilisers. He believes that the excess organic waste that pollutes Egypt could be turned into an opportunity to make some money.

“Not only will the initiative benefit crop yields, but if we used organic waste to produce organic fertilisers, the cost will be less because we will stop importing chemical fertilisers,” he says.

“With excess organic waste we can export fertilisers in the future. It will lessen soil degradation, create job opportunities and most importantly improve public health because the quality of crops will rise. This will happen without any economic burden to the government.”

He adds that for the success of any efforts in the environmental sector “we need to work with the government because when it comes to the interest of the country all stakeholders must be at the negotiation table. We have to cooperate, network, put political differences aside and come up with the best solutions to solve environmental challenges.”

Zayed is less confident in the government’s ability to collaborate with diverse facets of society.

“The average Egyptian is not even part of the equation for this regime,” he says. “Unless this is changed, sitting with a government that does not listen to anything but its own voice is futile.”

Total of 1.9 million newborns vaccinated against poliomyelitis in 2018: Ministry of Health