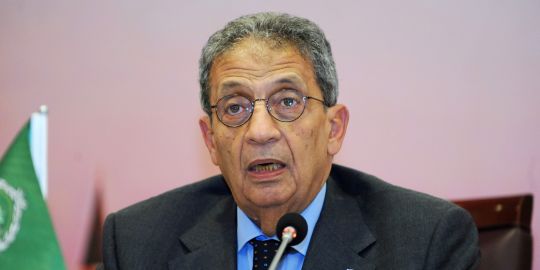 Moussa met with deputy Supreme Guide of the Muslim Brotherhood Al-Shater at the home of Ghad Al-Thawra Party Chairman Ayman Nour. Freedom and Justice Party (FJP) Chairman Saad Al-Katatni was also scheduled to attend the meeting, but Moussa left before his arrival.

In an official statement released on Thursday, Moussa said he clearly delivered a message to the Muslim Brotherhood that both individuals and parties call for early presidential elections. He added that all will protest to fulfill that goal on 30 June.

“Al-Shater was not convinced with the idea of early presidential elections,” Moussa told independent satellite channel Al-Tahrir. “But I can tell the regime is apprehensive of the protests to say the least.”

The former presidential candidate defended his attending the meeting, saying: “I don’t see any reason preventing me from taking part in such meetings which aim to get to know the true stances of different political figures.”

“This is of crucial importance to the current political calculations and the issues of national security.”

Moussa cited earlier experience in political negotiation as a former ambassador, former minister of foreign affairs and former secretary general of the Arab League. “I have repeatedly met with national enemies,” he said, adding that meeting with Egyptians who represent a conflicting viewpoint is definitely a lesser challenge.

Moussa apologised in the statement for any misunderstanding that stemmed from announcing the meeting in an unorganised manner. He suggested that the invitation to the meeting might have been tainted by ill-intentions.

Khaled Dawoud, NSF spokesperson, stated that the meeting was a personal initiative from Moussa, adding that Moussa himself clarified he did not participate on behalf of the front.

“We look forward to hearing more about the meeting from him during the NSF meeting on Saturday,” Dawoud said. “However, our official position remains unchanged; we support the 30 June demonstrations and call for early presidential elections because we think we have an inefficient president and an inefficient government.”

Several opposition groups have announced intentions to participate in a nationwide protest on 30 June to demand President Mohamed Morsi step down and early presidential elections. The protest is being organized by Tamarod, the petition campaign seeking 15 million signatures from Egyptians withdrawing their confidence from Morsi as president.