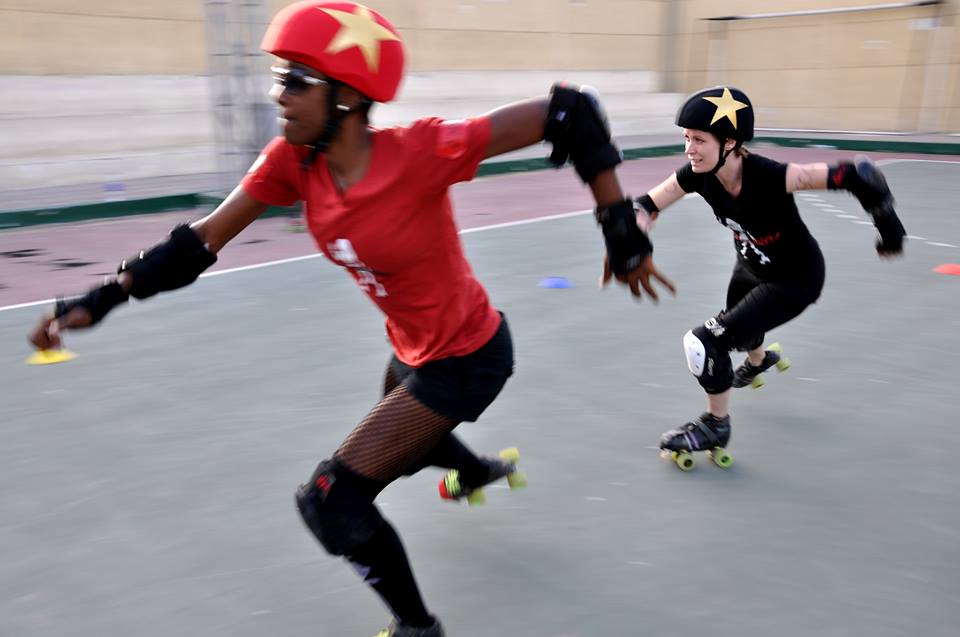 Aiming to raise funds for their very first bout, and to give some visibility to their sport, the members of CaiRollers have organised a fundraising event this Friday night.

“The party we are organising aims to raise funds because we have no sponsors for the team, and the money comes from our own pockets,” said Susan Nour, a CaiRollers member. “However, it also aims to raise awareness for our sport. We will show a film of a bout and then make a brief demonstration,” said Susan Nour.

The night is also planned to showcase some musical talent, including musician Tareq Tohamy and the Egyptian musical comedy duo High on Body Fat.

“The whole point is to get the word out about roller derby,” Nour emphasised. “The more people coming to the party and our first bout, the better.”

After months of practice, CaiRollers’ first bout will take place on 14 June, from 6pm to 8pm at Maadi Club in Cairo. As they are the only team in Cairo, they will divide themselves into two teams. “The next step, hopefully, would be to play against teams from other countries,” said Nour. “There is another team in Dubai; it would be great to play with them. In the future we may also play with teams from Europe.”

However, after their first bout, CaiRollers’ players will take a two-month break before beginning the new season in September.

Egypt’s first roller derby team was formed in September 2012 and has now grown to boast 19 members. The public interest for roller derby, an all-female sport, in Egypt is “definitely growing”, said Nour. However, “there is not a high demand,” underlined Nour. After all, the sport bears an image of brutality and intense physical contact.

Although it is both a thrilling and somewhat violent sport to many, “as soon as they try it, most of the girls recognise roller derby is a lot of fun!” She added that the CaiRollers team “teaches everything to new members, from being on skates to the games’ rules”. Every girl interested in joining the team is warmly welcomed, regardless of her skating skills.

The fundraising event will be held at Swiss Club Cairo, near Kitkat Square, in Imbaba. Tickets can be bought directly at the entrance for EGP 70, or in advance for EGP 50. Details about purchasing tickets online are available on CaiRollers’ Facebook page.