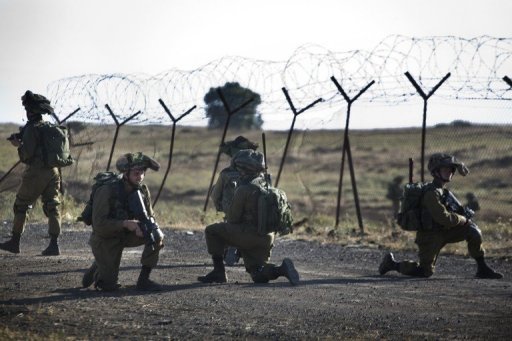 AFP – Syrian regime forces on Thursday retook the only crossing along the Israel-Syria ceasefire line in the Golan Heights after it was seized earlier by rebels, an AFP correspondent and a security source said.

Regime tanks were seen on the Syrian side of the Quneitra crossing approaching the ceasefire line, the correspondent said, after clashes there between rebels and the Syrian army that involved small-arms fire and shelling.

A security source, who requested anonymity, separately confirmed to AFP: “The Syrian army has recovered control of the crossing. There are sounds of explosions from time to time but far less than in the morning.”

Earlier, the army confirmed that the Quneitra crossing and the nearly town of the same name had been “overrun” by rebels fighting President Bashar al-Assad’s regime in Syria’s more than two-year civil war.

Earlier, an Israeli military spokesman refused to comment on the report but confirmed to AFP that a closed military zone had been declared in the area.

Both the Observatory and the Israeli radio station said fierce fighting was still under way in the actual town of the same name, which lies close to the crossing.

One source said the military had warned farmers not to approach the area and that an unspecified number of Syrian soldiers had been taken to an Israeli hospital for treatment.

“There are apparently also those who are badly injured among the Syrian (armed) forces who have been taken to hospital in Safed,” he said.

It is the only direct passage between Israel and Syria and used almost exclusively by Druze residents of the Israeli-occupied Golan Heights who are allowed to cross over to study, work or get married.

Israel seized a large section of the strategic plateau from Syria in the 1967 Six-Day War and annexed it in 1981, in a move never recognised by the international community.

Thursday’s fighting comes a day after the rebels suffered a military and psychological setback when they were routed from Qusayr after a devastating 17-day assault by the Syrian army bolstered by Hezbollah fighters from Lebanon.

The rebels conceded they had lost Qusayr after controlling it for a year, but opposition interim leader George Sabra declared they would fight on “until the whole country is liberated”.

The army said the “heroic victory” in the offensive, launched on May 19, served as a warning that it would “crush” the rebels and bring “security and stability to every inch of our land”.

The battle for Qusayr, a conduit for fighters and weapons just 10 kilometres (six miles) from Lebanon and linking Damascus to the Mediterranean coast, left the town in ruins.

Its capture opens the way for forces loyal to Syrian President Bashar al-Assad to move on the central city of Homs, much of which the rebels still control.

Hours after Qusayr fell, at least five rockets launched from across Lebanon’s border with Syria hit the eastern Lebanese city of Baalbek, a Hezbollah stronghold.

Two landed in the city’s Roman ruins and the other three hit the city centre, a security source told AFP. Two people were injured in the attack.

The government breakthrough came as France said the international community had to respond to test results from both French and British laboratories confirming the use of banned nerve agent sarin in Syria’s civil war.

Washington’s initial response to the French declaration Tuesday was cautious, with a White House spokesman saying they needed to know more.

Then on Wednesday, US Secretary of State John Kerry said he had asked France to share its data.

Senior Russian, US and UN diplomats meeting in Geneva, meanwhile, admitted that a widely anticipated international peace conference for Syria would not take place in June.

A date has still to be fixed for the talks to end the 26-month conflict, which monitors say has killed more than 94,000 people.

One of the main stumbling blocks was disagreement over who could take part.

“It will not be possible to hold this conference in June,” UN-Arab League peace envoy Lakhdar Brahimi told reporters, adding that he hoped for a July date.

Russia and the US have struggled to overcome rebel objections to a proposed invitation to the government side without a prior commitment that Assad step down.