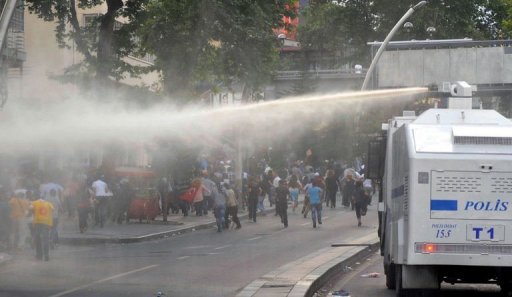 By Roland Lloyd Parry (AFP) – ISTANBUL — Turkey’s embattled government insisted it was “not a second-class democracy” even as police tear-gassed protesters massed in the streets calling for Prime Minister Recep Tayyip Erdogan to quit.

Bellowing to the din of drums and wailing Turkish pipes, teachers, doctors, bank staff and others marched in a sea of red and yellow union flags in the capital Ankara.

They took to the streets of Istanbul too, converging peacefully on Taksim Square, the epicentre of nearly a week of violent clashes.

“Taksim, resist, the workers are coming!” they chanted in Istanbul.

Most of their anger was directed at Erdogan, who has dismissed the protesters as “extremists” as he grapples with the biggest challenge to his decade in power.

In Ankara, police fired tear gas and water cannon to disperse massing crowds, but there were no clashes reported in Istanbul, the first such lull since Friday.

He denounced the authorities for having failed to consult the public over plans to redevelop the Istanbul park, the issue that sparked the initial protests on Friday.

“This insensitive policy is no doubt part of the ever more authoritarian and repressive attitude of the government,” he wrote.

Two people have been killed in the six days of unrest nationwide, according to doctors and officials.

The national doctors’ union said more than 4,000 had been injured, 43 of them seriously, as police tried to quell the protests with tear gas, pepper spray and water cannon.

Turkey’s Western allies have voiced concern in recent days over the police violence.

Turkey, while acknowledging some police excesses, has hit back at criticism of its handling of the crisis, a foreign ministry source told AFP.

“Turkey is not a second-class democracy,” Foreign Minister Ahmet Davutoglu told US Secretary of State John Kerry in a phone call Tuesday, the diplomat said on condition of anonymity.

US State Department official Jen Psaki denied suggestions that this Washington’s view of its NATO ally.

But, she added: “We have had concerns over the past couple of days about instances of police brutality.”

Davutoglu assured Kerry an investigation was under way into the police response. He played down the demonstrations, likening them to the Occupy Wall Street movement in the US in 2011, the source said.

“Erdogan needs to apologise, resign and go to court for the things he has done, for the excessive force,” said Tansu Tahincioglu, a 26-year-old web entrepreneur in Istanbul.

“Before, people were afraid to express their fear publicly. Even tweets are a problem. But now they are not afraid,” he told AFP.

The premier, seen as increasingly authoritarian, has been accused of seeking to force conservative Islamic values on Turkey, a mainly Muslim but constitutionally secular nation. He is due back from a four-day trip to North Africa on Thursday.

In the premier’s absence, Deputy Prime Minister Bulent Arinc on Tuesday apologised to wounded protesters and promised that the government had “learnt its lesson”.

At least 25 people were arrested in the western city of Izmir for “misleading and libellous” Twitter posts after Erdogan accused the microblogging site of spreading “lies”.

Protesters rely on social media to organise demonstrations and complain about a lack of coverage of the crisis by the mainstream media.

In a further bid to soothe tensions, Arinc met with leaders of civil groups, including the movement whose initial protest sparked the nationwide demonstrations — a campaign to save Istanbul’s Gezi Park from redevelopment.

At the meeting, protest representatives urged the government to fire the police chiefs of cities where security forces had used excessive force to quell the unrest.

Sitting at the crossroads of East and West, Turkey has long aspired to join the European Union, which sets strict requirements on human rights for prospective members.

Erdogan’s Justice and Development Party (AKP) first took power in 2002 and has won three elections in a row.

But opponents accuse him of repressing critics and pushing conservative Islamic policies such as religious education reforms and a law curbing the sale of alcohol.

Erdogan told protesters they should wait to express their views in elections next year, when observers expect him to run for president.