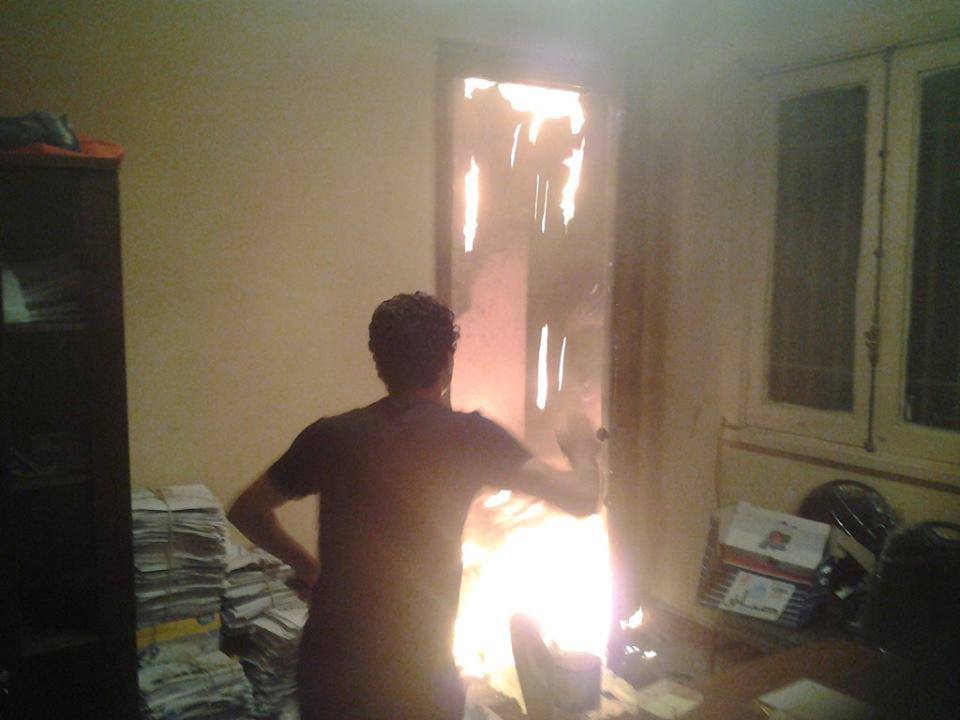 More than 24 people were injured in clashes between members of opposition parties and the Muslim Brotherhood in Damanhur, Beheira governorate.

The Union for Professional Syndicates was holding a seminar at the Lawyers’ Syndicate in Damanhur on Thursday; members of political parties that belong to the opposition were attacked when they tried to attend the seminar.

“The seminar was open to the public and we wanted to attend; members of the Muslim Brotherhood locked us in and attacked us” said Islam Bassiony, a member of Al-Tayar Al-Sha’aby in Damanhur.

He added that a number of Tamarod members who were organizing a protest for the anniversary of Khaled Saied rushed to the lawyers’ syndicate to help them.

Tamarod, a campaign working to gather signatures to withdraw confidence from President Morsi has stirred controversy especially after gathering more than seven million signatures; the movement had announced protests against the regime on 30 June.

“A number of members protested on the anniversary of Khaled Saied’s death demanding his rights, they were attacked by Brotherhood ‘militias’ 18 were injured in the clashes” said Mai Wahba, the head of Tamarod media office.

Meanwhile Tamarod’s main headquarters in downtown Cairo was set ablaze early on Friday; media spokesperson of the movement Hassan Shahin was injured in the fire trying to save the signatures collected.

“In a new episode of terror, President Morsi’s regime continues to rule the country through militias and thuggary” read a statement issued by Tamarod on Friday.

They added that the regime committed two crimes in just a few hours; attacking members of political parties in Damanhur and burning the headquarters in Cairo.

“This reflects how weak and frightened this regime is; its end is certainly near” the statement read.

Head of Tamarod media office Mai Wahba said that they filed a report against President Mohamed Morsi, the Supreme Guide of the Muslim Brotherhood Mohamed Badeei and his deputy Khairat El-Shater as well Assem Abdel Maged leader of Al-Jamaa Al-Islamiya and the Tagarod campaign that was established to counter Tamarod.

“We accused them of attempted murder against members of Tamarod and burning the headquarters” Wahba said.

Tamarod said in their statements that the attacks will not discourage them from proceeding with 30 June protests calling for early presidential elections.

“The Brotherhood has to understand Tamarod has become a popular trend… Egyptians have decided to take control of their destiny and hold early elections” the statement read.

The Muslim Brotherhood spokespeople could not be reached for comment.