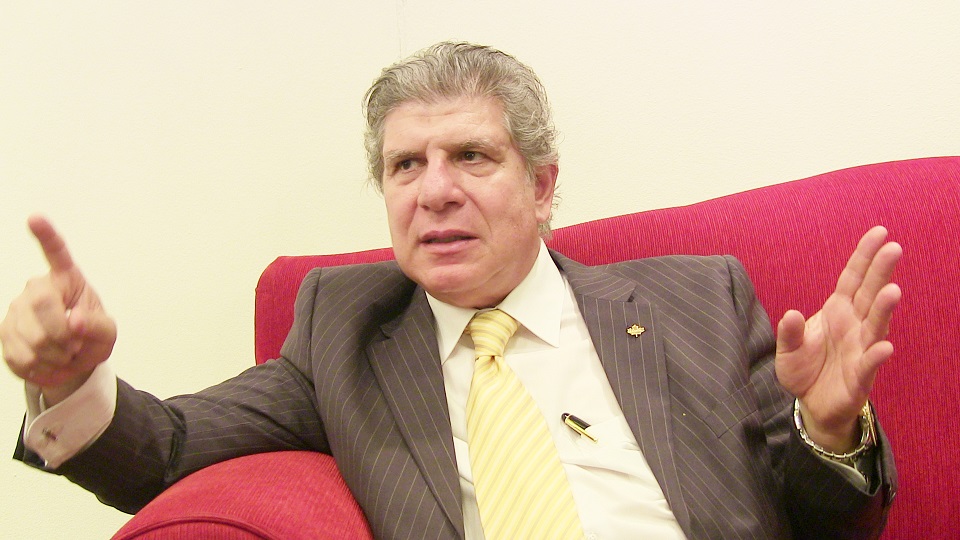 Egypt possesses no clear economic vision for the future, says Fayyaz Azz El-Din, chairman of the Canadian Chamber of Commerce in Egypt and the Middle East.

He added that the country’s previous governments bear responsibility for the current lack of vision and for failing to provide a stable foundation upon which to bring the country out of economic ruin.

He criticised the government of Hesham Qandil for not efficiently addressing the country’s various economic crises, both with regards to how they affect investors in addition to individual citizens.

“It’s no secret that everyone is watching and waiting for what will happen on 30 June and during its aftermath,” he said. “Whenever I talk to anyone they always tell me to wait until after 30 June passes… we are all standing on our toes… and investors don’t like instability.”

El-Din said political stability and improvements in security will help attract investment back into Egypt, particularly from European countries which possess capital surpluses and are looking for up-and-coming markets in which to invest.

He further stated that Egypt’s negotiations with the IMF for the country’s pending $4.8bn loan are beginning to look “daunting”, saying, “obtaining the $4.8bn is not the goal in it of itself, but rather what is important is what the loan represents in terms of serving as a stamp of approval for Egypt’s economy, its ability to undergo recovery, attract investment and pursue other loans.”

He added: “Egypt needs this stamp of approval in order to promote confidence in its economy,” noting that without stability in the street investment will not return to the country.

El-Din further called on the government to restructure its fuel subsidies program, saying such a process should be implemented gradually.

He stated that if the government wants to increase the price of energy and petroleum used in factories or by citizens, that such a program should be advertised and made known beforehand and implemented gradually, saying it was bad policy to increase prices 400% without prior warning. Many factories have suffered huge losses as a result of the implementation of new energy prices.

“Increases in the cost of energy within Egypt’s industrial sector will not in it of itself push away investors,” he said. “Energy prices are increasing all over the world. What investors are looking for today are new markets in which to sell their products.”

Regarding food subsidies, El-Din said this was a problem that has existed, “since [he] was born,” and could only be addressed by changing the country’s economic environment, raising average wages and increasing production. Implementing such policies he said would require a comprehensive vision for state economic policy in the future.

Lifting food subsidies, he said, was not something that could be implemented without first increasing average wages. The system itself needs to change, he said, so that citizens feel comfortable with the altering of subsidies before they are lifted.

He said these problems were inherited from previous governments and are not solely the fault of Egypt’s current representatives. He further pointed out that while Egypt possesses no vision for the future, Qatar has mapped out its economy out until 2020, and by some standards, even 2030.

“The new minister has not finished or even begun to pursue what the previous minister started, causing us to constantly go around in a circle,” El-Din said. “What Egypt needs now is vision, not simply the shifting of individuals or even governments.”

El-Din supported reconciliation with Egypt’s business community, saying that such a step was in the state’s best interest. He pointed out that a number of lawsuits have been filed against the country’s businessmen with many having their assets frozen in European banks.

Commerce between Canada and Egypt in 2011 totaled $1bn, an unprecedented figure he noted, which was a shock considering that most experts had expected it to decrease.

He stated however that this decrease was small when one took into account the economic circumstances of the past two years. He added that the trade balance between the two countries in 2012 increased 18% in Egypt’s favour.

Growth in the Canadian-Egyptian trade balance demonstrated the potential for Egypt’s economy to grow, something which could be achieved with clear economic vision, political stability and improvements in security, El-Din said.

He said that despite the Agrium Inc. factory is being Canadian, and that as a condition of this its gold is exported there, small amounts of gold produced within the factory have been sold locally to meet local demand

El-Din said the chamber has increased its level of cooperation with Egypt over the last two years, sending 11 delegations of businessmen to the country to learn about new commercial opportunities.

He described the chamber’s role with Egyptian businessmen as very important, saying that such a relationship was critical in helping to make the latter aware of commercial opportunities in Canada in addition to the laws governing trade within the country.

He added that Canadian investment in Egypt totaled $4bn annually, particularly in the mining, petrochemicals and construction sectors, saying the chamber’s current policy was to preserve these investments and not take them out of the country.

He pointed out that Canada had not pulled any investments from Egypt over the last two years due to their unique nature, most of which were in the mining sector.

He also spoke of the chamber’s role in helping to address the problems faced by investors operating throughout Egypt, particularly with regards to energy and labour. The chamber, he said, periodically cooperated with Egypt’s executive branch to find solutions to various problems faced by Canadian investors, in ways that were mutually beneficial for both countries.

He further stated that in April the chamber successfully hosted a delegation composed of large corporations interested in tourism in Egypt, in addition to travel writers working for a number of newspapers and magazines. The purpose of the trip was to better inform those in attendance of the many tourist attractions available in Luxor, Hurghada, and Sharm el-Sheikh, in the hopes that they would promote travel to these locations within Canada. According to the Ministry of Tourism, the delegation visited cultural tourist sites in Aswan, Luxor and Cairo.

El-Din said he expected the trip to have a large impact on Canadian citizens throughout the coming year, however such success was dependent upon political stability and improvements in security throughout the country.

“We will cooperate with Egypt Air in Canada in addition to the Ministry of Tourism in order to promote travel to Egypt,” he said, reinforcing that the recent hosting of the Canadian delegation will have a large impact on Canadian citizens.

Minister of Tourism Hisham Zazou recently asked that El-Din and the Chamber of Commerce enlist the help of Egyptians living in Canada to help promote tourism within the country, in addition to increasing the amount of charter flights exchanged between the two.

Egypt Air recently opened a new route between the Cairo and Toronto, with four trips scheduled a week on Boeing 300/777 aircrafts, each with a capacity of 346 passengers.

The number of Canadian tourists traveling to Egypt increased in 2012 by 1.8% compared to 2011, however El-Din noted that during the first quarter of 2013 this number increased only slightly by 0.4%.

He further stated that Canadian investors operating in Egypt prefer to invest in the mining and petrochemical sectors, adding that the Chamber recently held a conference on mining last March, which was attended by representatives from companies all over the world.

He further stated that nearly 50% of all mining companies throughout the world were Canadian, adding that Egypt possesses a wide array of mineral resources ready to be exploited.

El-Din finished saying that the chamber is set to establish a gold polishing and purification lab within Egypt so as to avoid having to travel to Canada in order to undergo the process.