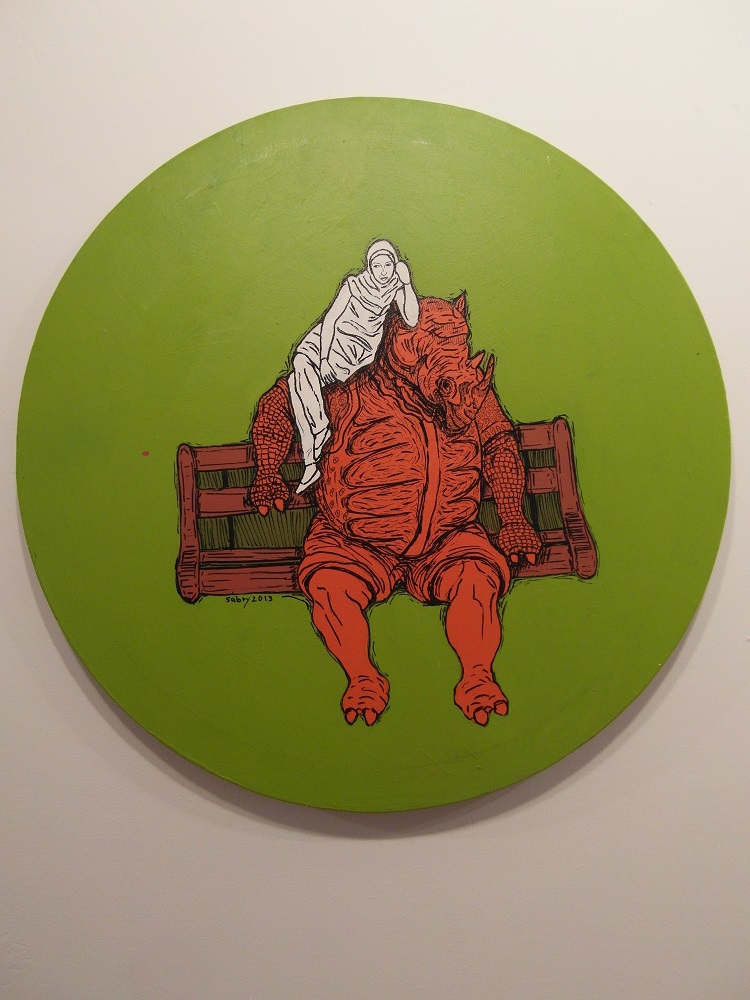 This is a story about a rhinoceros.

The monstrous animal imposes itself in each of Ahmed Sabry’s paintings. It flaunts its impressive stature among a crowd, standing beside demonstrators armed with iron poles.

Even when the rhinoceros is not physically there, its shadow looms on a wall. It remains in the dark, crouching in the shadows, waiting.

To be sure, this is no ordinary animal. This rhinoceros is an allegory.

The exhibition in which it features is sharp and colourful. Sabry paints in a style that is simple and incisive, and at times comic. In canvases of different shapes and sizes, bold strokes outline the characters and scenery, leaving viewers guessing at the role of the rhino.

In Mashrabia Gallery, where the exhibition opened on 9 June and will be hosted until 4 July, Sabry revealed the meaning of the armoured ungulate in his work.

The Rhino Story is a book written about a year ago by a friend of Sabry. He explained that while writing, Mohamed Abdelkarim sent his work to him as it came. For his part, Sabry began to paint. “There was an agreement between us,” Sabry said. “Neither of us could interfere in the work of the other.”

He could not ask Abdelkarim questions about the meaning of the story; nor could Abdelkarim see his own paintings.

The rhinoceros had been used before by Abdelkarim in several of his art performances. “I was using the rhinoceros as an animal for radical decisions,” he explained, “Because when it attacks, the rhinoceros attacks running straight ahead.”

The choice of beast is at once wise and striking, with the rhinoceros appearing as a grotesque animal. Its thick armour is certainly impressive, though its roughness seems to be in contrast with the rest of the canvas.

In light of Sabry’s explanation of the rhino, the exhibition recalls Sabry’s previous work, which is critical of aspects of Egyptian society.

The book, The Rhinoceros , which gathers both the paintings of Ahmed Sabry’s exhibition and the writings of Mohamed Abdelkarim, can be bought at Mashrabia Gallery.