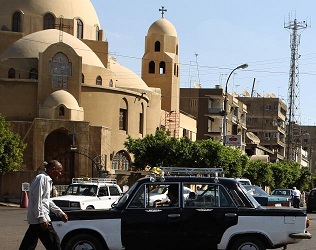 Participation in the 30 June protests will not be dictated by the church, but by the personal conviction of its members, according to Egypt’s Orthodox Church.

Bishop Refael, Secretary of the Holy Synod, said in a Wednesday tweet that “every person is free” and “any statements [regarding the protests which are] attributed to the church are incorrect.”

Coptic lawyer and activist Naguib Gebrail meanwhile told Daily News Egypt that Copts will participate as Egyptian citizens, stressing, “The Pope does not have any authority over the Copts and protesting remains a matter of personal freedom”.

Assem Abdel Maged, leader of Al-Jamaa Al-Islamiya, had repeatedly threatened Copts from joining the rallies, claiming they are the main party behind the calls for 30 June protests against President Mohamed Morsi.

“Do not sacrifice your sons,” he said in a televised interview on Al-Nas channel, addressing the Coptic community directly. He claimed that Copts are leading the counter-revolution and sewing chaos throughout the country.

The Maspero Youth Coalition, meanwhile, has issued a statement in reply to Abdel Maged’s claim, affirming that Copts would participate in 30 June protests as Egyptian citizens, as they are “an essential part of the Egyptian community, belonging to many political parties and movements.” The statement added that the church has no political authority over those Egyptian citizens who come out to participate in what it called a “great revolution”.

The coalition also announced their intention to file a complaint on Thursday with the Attorney General against Abdel Maged for threatening social peace and Egyptian citizens, demanding an investigation. They added that Abdel Maged would bear “full responsibility for any attacks on Copts or Coptic churches during the events of 30 June.”